As long as he can remember, David Salsone says he’s felt a “desire to be part of something larger than myself.” He was a high school senior when the terrorist attacks of 9/11 happened. They helped trigger his decision to aim for a military career. 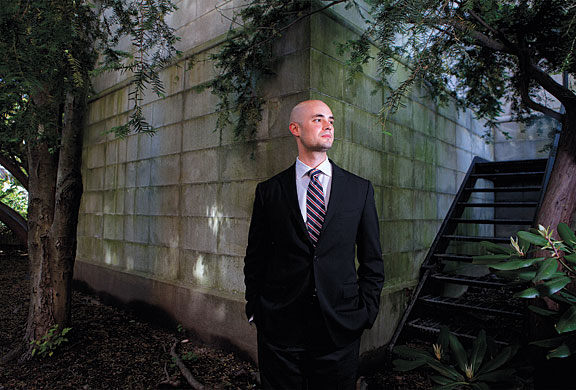 Salsone grew up in the town of Oceanside, Long Island. Neither his mother, a nurse, nor his father, who owns a successful auto body shop, was able to attend college. “College was something they stressed but never really explained,” Salsone says. “I didn’t really know what it was, only that I needed it.” He looked at his father, he says, and saw someone who made a decent living and had put together a good life without going on to higher education.

Salsone joined the Navy and scored well enough on the entrance exam to have his choice of assignments. The military suggested its nuclear research program, but Salsone soon realized that would mean spending all his time on a submarine. “I like sunlight,” he says.

He chose to spend the next two years studying satellite communications, eventually going on to work at the Naval Computer and Telecommunications Station in Bahrain. With the war in Iraq ongoing, he says, “I felt it was where I could have the biggest impact.”

It was hell at first. As the most recent arrival and the grunt, he was ordered to fetch breakfast for the other personnel, which meant two round trips across the base. “It was 120 degrees outside and no one else wanted to do it,” he recalls. Soon, though, he was working as an operations manager, helping coordinate telecommunications for the Navy’s ships and for Army and Marine ground troops in the United States, Europe, Asia, and the Middle East. His coworkers, he says, soon became “a second family.”

At night, Salsone took classes at the University of Maryland’s University College in Bahrain. He studied biology, international relations, and writing. He finally began to understand what going to college was about. His girlfriend, a Harvard alumna and a British citizen of Punjabi descent who’d grown up in Bahrain, told him he was Ivy League material.

“When your parents tell you how great you are, it doesn’t sink in so much,” says Salsone. “But when she said ‘You are just as driven and talented as the people I went to college with,’ I started to believe it.”

Salsone chose Brown for its flexible curriculum and the Resumed Undergraduate Education (RUE) Program, which offers a route to the University for students who’ve been out of high school for six years or more. He says he was aware of Brown’s reputation as liberal and anti-establishment, but dismissed it as a stereotype. “You can’t sum up a place by saying it’s this or that,” he says.

Once on campus, Salsone helped found the Student Veterans Society. Despite having only a handful of members for Veterans Day 2009, the group organized a ceremony at which President Ruth Simmons and U.S. Senator Jack Reed of Rhode Island spoke. It was the highest-profile commemoration of Veterans Day in recent Brown history. Every year since then, Salsone has made sure Brown continues to commemorate the service of its students in battles stretching back to the War of Independence.

“It’s part of a very rich history at Brown that we felt had been forgotten,” Salsone says. He adds, “The majority of Brown students aren’t exposed to someone who’s served in the military. There’s a deficit of information, but it’s not willful ignorance.”

Over the past year, Salsone has aided Brown’s newly established Office of Student Veterans and Commissioning Programs, which is aimed at, among other things, helping students interested in ROTC. Salsone has also worked on a University website giving information about such things as financial aid and the RUE program to veterans interested in attending Brown.

Salsone next plans to move to northern California work for the financial giant Morgan Stanley. “I’m done with making service to the military a part of my everyday life,” Salsone says. “That part of my life is completed.”