One day during her first year at Brown, Jessica Biesel was sitting in the Ratty when a slip of paper on the table caught her eye. On it was information about the suicide-prevention hotline run by the Samaritans of Rhode Island and its student-volunteer club at Brown. 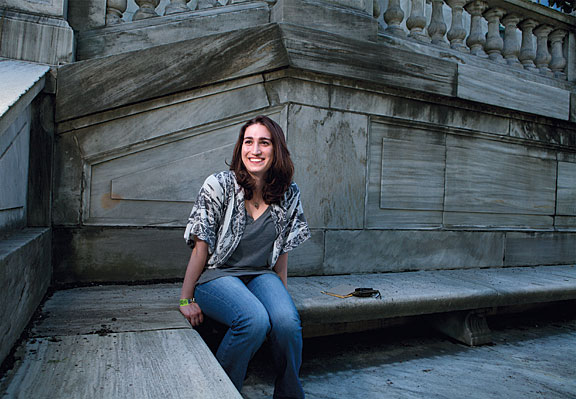 The note struck home. The previous spring, Biesel’s thirteen-year-old brother, Gary, had killed himself. “I didn’t want anyone to have to go through what he went through,” she says.

So Biesel decided to become a Samaritans volunteer. She went through roughly twenty hours of training, but, instead of answering the hotline herself, she decided to work on organizing events and recruiting volunteers. “I thought this had only happened to me,” she says, “but through the Samaritans I’ve met so many people now who have lost somebody to suicide. The stigma attached to suicide is enormous. I had never realized how prevalent it is. By raising awareness, we can get people to the help they need.”

In between playing intramural volleyball and studying, Biesel became head of the Samaritans’ campus volunteer group. By the time she graduated in May, the number of student volunteers had doubled to almost seventy. For her leadership and her contributions to student life, at Commencement she was one of a handful of students to receive an Alfred H. Joslin ’36 Award, which is given for demonstrating extraordinary student leadership.

Although Biesel entered Brown as an engineering student, she took a sociology class during her freshman year and, she says, “I fell in love with the material.” She switched her concentration and wrote an honors thesis on the way gender is represented in pop music lyrics.

After graduation, she moved to Fort Lauderdale, a city where she knows no one, to take a job at Citrix, an information technology company that Biesel learned about at a Brown career fair. She figures she’ll work there for a while and then head back to grad school, although she’s not yet sure what she will study there.

And she’s not giving up the Samaritans. Her final project at Brown was to write a business plan for a nonprofit venture. She realized after talking with the director of the Samaritans that little support is given to children who have lost friends or close relatives to suicide. Bereaved teenagers and young adults do have organized peer groups, but there is nothing like that for young children. Biesel’s business plan created a kids’ summer camp named after her brother—Camp Gary.

For now, it exists only on paper. “We don’t have funding yet,” Biesel says, “but it’s something I definitely want to tackle.”