Going to college—any college—was unusual for students in her El Paso high school, but she’d heard about Brown through a friend in a wealthier school district, and she says, “I fell in love with the idea of the open curriculum.” Admitted to the Program in Liberal Medical Education, Garcia was squarely headed toward an MD when a crisis threatened that dream. 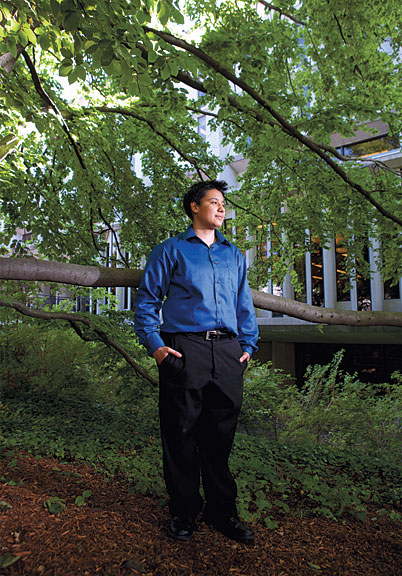 Her mother, who had already received two liver transplants, needed a new kidney. During her mom’s previous surgeries, Lorena had looked after her younger sister while their parents stayed near the transplant center in Dallas, ten hours away. This time Garcia worried that if her mom became seriously ill, there wouldn’t be enough money to fly back to Texas from Rhode Island. Rather than matriculate, she wanted to stay local.

Garcia’s doctor warned her it was a dumb decision. “If it’s critical for you to get back here,” he promised, “I will personally pay for your ticket.” Fortunately, he never needed to buy that ticket. This May, the Garcias flew to Providence to see Lorena receive not only her diploma, but an Alfred A. Joslin ’36 Award for her “extraordinary contributions to student life.”

Soft-spoken and pensive, Garcia says, “I didn’t talk to anyone as a freshman.” The Third World Center, she adds, was where she found her voice. There she learned it was okay to talk about race, class, gender, and other sensitive issues, a lesson she has conveyed to others both on and off campus. She’d come out as a lesbian in high school, and at Brown she volunteered at Youth Pride Inc., where she developed workshops on gender and sexuality for teachers and health professionals working with young people.

On campus, she held down jobs in the library and science center while serving as a minority peer counselor and running the Third World Transition Program for incoming students. She was elected to the search committee for a new Third World Center director. She interned at a local organization that cares for AIDS patients, volunteered with the Brown Immigrants’ Rights Commission, raised money for financial aid, helped administrators meet the needs of low-income students on campus, and, somehow, made time to work out daily with the women’s rugby team.

As Garcia’s interest in ethnicity grew, she switched her concentration from human biology to ethnic studies. She also found a way to combine her interests in medicine and ethnicity: thanks to a Royce Fellowship, she spent last summer at Northwestern Memorial Hospital’s Hispanic transplant program in Chicago, the only one of its kind in the United States. In English and Spanish, she surveyed patients about the program and hopes to publish the study.

While she was at Northwestern, the director of the transplant program received a call from a doctor eager to hear Garcia’s findings. He worked at a center in Dallas that served lots of Latino patients: the same hospital where Garcia’s mother had received her transplants all those years before.

Still, Garcia’s decision to study ethnic studies bewildered her family back in Texas. “My dad especially said, ‘You’re studying Latinos? You could have just stayed in El Paso!’”