Experiencing the death of one’s child is a tragedy no one should have to endure. To lose a child who has survived and even thrived, against long odds, into his teens through a terrible illness—that is heartbreak. But to lose such a child to an apparently catastrophic failure of the health-care system—that is unfathomable. 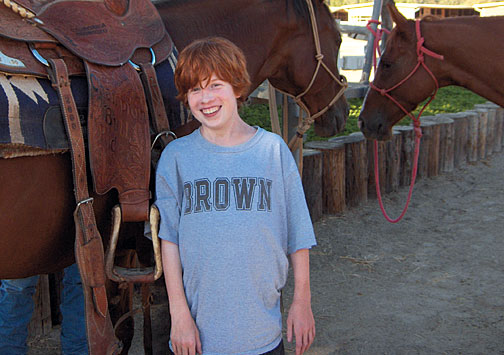 Damon Weber on the set of Deadwood.

Here are the facts Doron Weber presents in his harrowing memoir, Immortal Bird: Damon, the eldest of Weber’s three children, was born with a single ventricle in his heart, a rare defect that required a drastic surgical treatment called a Fontan procedure to keep him alive. Then, in 2001, at twelve, he was diagnosed with an even rarer condition that endangers Fontan survivors: protein-losing enteropathy, or PLE. In 2005, less than a year after undergoing a heart transplant, Damon died.

What is disputed—and is now the subject of the family’s medical malpractice suit against a renowned New York City medical center—is what took place in the year after the transplant. Weber recounts a cascading series of blown diagnoses and incompetent treatments. Worse, none of the doctors takes full responsibility for Damon’s care. They are on vacation, don’t return calls, are slow with urgent lab results, and ignore the family’s concerns.

All this makes for harrowing reading, especially in the book’s final quarter, in which Damon’s downward spiral begins. Much of the rest of the book consists of a father’s proud portrait of a flame-haired boy who was, by all accounts, vivacious, talented, and enormously popular, even as he battled a debilitating illness.

Considering the tragedy of a life lost prematurely, and Weber’s desire to preserve the memory of a special father-son bond, one can forgive his parental conceit and seeming blindness to the family’s privileges. The latter include a vacation home on the Isle of Skye and connections to luminaries and TV producers, which help land Damon an acting gig on the HBO series Deadwood.

Weber—whose job at the Alfred P. Sloan Foundation involves making science and technology understandable to the public through the arts and the media—has the desperate curiosity of a Lorenzo’s Oil dad. He reads every scientific paper, spares no expense, and overlooks no medical expert in his attempt to save his son. That all this passion and drive comes to grief is what ultimately makes Damon’s story, and Immortal Bird, moving and unforgettable.

Reader Responses to A Father's Story