Vampires. Mutants. Husband-and-wife assassins. They’re all in a day’s work for Hollywood producer and screenwriter Simon Kinberg ’95. And that’s to say nothing of wrestling with the real Goliaths: oversized Tinseltown egos. 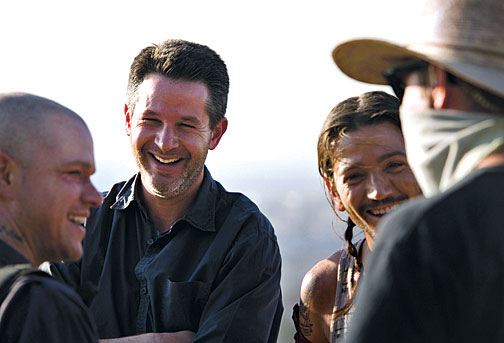 Matt Damon, Kinberg, and Diego Luna on the set of the futurisic thriller Elysium.

The London-born, Los Angeles–reared Kinberg is best known for writing Mr. & Mrs. Smith and producing X-Men: First Class. He also earns up to $300,000 a week banging out last-minute tweaks as one of the industry’s highest-paid script doctors. Much of that work goes uncredited, though Kinberg did earn a credit as a writer for Sherlock Holmes as well as this summer’s hit Abraham Lincoln: Vampire Hunter.

His doctoring role, Kinberg explains, “is less about the words on the page and more about managing egos and perspectives and solving tangible problems like ‘The third act doesn’t work, and we’re $30 million over budget.’” That’s why the work pays so well. With $100 million to $200 million invested in a Hollywood movie, he says, “The risk of failure is so high. If you do blow it, the movie can shut down.” The adrenaline-fueled eighteen-hour days a script doctor often has to clock can turn into a tightrope act in which writers must simultaneously please demanding studio bosses and insecure stars who have their own ideas about improvising dialogue.

At Brown, Kinberg never dreamed he’d end up writing movie scripts. When he was growing up in Los Angeles in the 1980s, he says, “All of my friends’ parents worked in Hollywood, and it was terrible. Everyone was divorced, drug addicted, in rehab. It was an unsavory world.” Instead, he set his sights on writing the Great American Novel. “I think I took thirty of my thirty-two classes in the English department—all English lit,” he recalls. “I felt like I would learn how to write by reading great writers. I would read five novels a week—great, classic, dense novels.” He tried writing one of those great novels himself, but never finished it.

After graduation, he moved to New York City and wrote short stories, supporting himself with a job in publishing. “I was hoping that, through the osmosis of being around good writing and seeing the business and economy of writing, I would magically become a professional writer,” he says. But people who read his fiction said, “It feels like a movie.”

After toying with the idea of earning a PhD in English literature, he opted for Columbia’s graduate film school, where he wrote a script about nineteenth-century grave robbers. A professor sent the sample to Hollywood agents, which led to meetings.

Now thirty-eight, Kinberg is married with two young sons. Although the family lives in Los Angeles, they maintain a second home in Tribeca. To stay sane in such a high-stakes industry, Kinberg says, he eschews coffee, watches a lot of sports, and escapes to New York City as much as possible. “Getting out of L.A. is good for my brain,” he jokes.
Tatiana Siegel writes for Hollywood Reporter.

Reader Responses to The Fixer