I figured that the rest of my retirement years would be much the same as the first few: living with my husband in a rural area east of Toronto and doing a bit of traveling. Then I suddenly found myself divorced and moving back to Toronto. At sixty I had to reinvent myself. 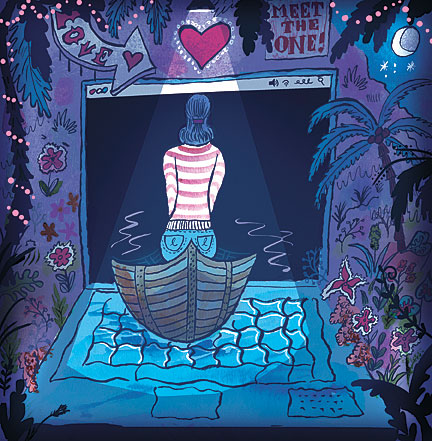 I reconnected with old friends, joined a gym and a community choir, and found some volunteer opportunities. But I was a little lonely. Having not totally lost faith in men, I decided to begin dating.

And I discovered online dating. What a brilliant idea! Instead of testing chemistry by chatting with perfect strangers, I could check out a man’s credentials, his likes and dislikes, without his even knowing about it. I set up my profile.

That’s when the anxiety started. If  I made myself sound too good, would I appear vain and insincere? If I was too self-deprecating, would I ever get a response? Should I upload a formal photo or one that makes me look like I know how to have a good time? I decided that being honest was the best approach.

I began to get e-mails. Most of them were from very young men. I wondered whether they were looking for sex or money or both. Having gone through my cougar phase long ago, I had no interest in meeting men significantly younger than myself.

Then came an e-mail from a man my own age. He sounded pleasant and caring. We spoke on the phone, met, and liked each other enough to begin dating. It wasn’t until about a month later that he admitted to having shaved five years off his actual age when setting up his profile. The next surprise came when I was at his home one evening and a group of police officers showed up with a search warrant. They had picked up his son for drug trafficking and were looking for evidence. My date professed ignorance, but when police found remnants of a grow-op in his garage, his credibility with me was gone.

Next came a handsome cyclist/skier/kayaker. Now I’m not much of a health nut or a sports enthusiast, but I did agree to a first-date ride with him on his recumbent tandem bicycle. On our second date, I happened to mention something about being an occasional smoker (this was, by the way, on my profile). That, he said, was a deal-breaker.

Then I went out to dinner with a retired teacher who told me right off that he was on a fixed income and I shouldn’t expect to be wined and dined. That was fine with me, except that he also turned out to be quite narrow-minded. To end things on a graceful note, I paid the tab.

You might think I’d lost hope by now, but a couple of years have passed and I’m still on a couple of dating websites. Of course, lately I haven’t gotten any e-mails from anyone looking to meet. I’ve now learned—as have thousands like me, no doubt—that online dating is not as easy as the ads on television make it seem to be. Joining a dating website doesn’t mean that you are necessarily going to find true love, and certainly not in a matter of days.

And, by the way, I am seeing a very nice man at the moment. I met him the old-fashioned way—in a bar.