Seniors: Be the Best!

The Baccalaureate, held every Saturday of Commencement Weekend in the First Baptist Meeting House, is always an ebullient service, with dancing and drumming and poetry and spiritual readings from just about every faith you can imagine. But when Simmons spoke to the Class of 2012 this year you could hear a pin drop. 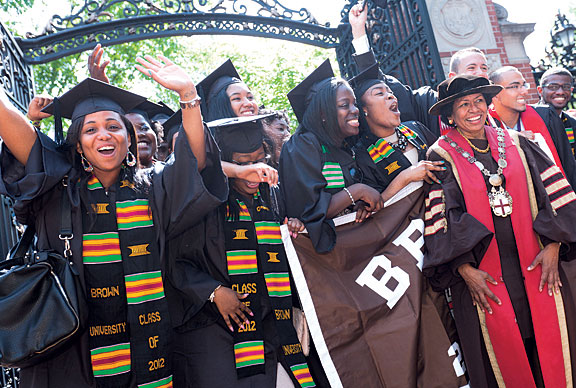 Scott Kingsley
President Ruth J. Simmons leads undergraduates through the Van Wickle Gates for her last time as president.
Students looked on admiringly as she told a story familiar to many on campus: that she was the youngest child born to a large family of sharecroppers in Grapeland, Texas, and that when she was seven—as machines displaced people picking cotton—her parents moved to Houston. There, she said, “I was able to attend school in every season and to advance from grade to grade in the routine manner taken for granted today.” While the bizarre logic of Jim Crow laws prevailed outside school, the classroom provided a counterweight, she said.

“To think that in a short span of time, our family history will have evolved from the cotton fields of my childhood to the world stage upon which [my granddaughter] is already comfortable is an emotional and fulfilling reality to contemplate.

“My life started with a wisp of hope that the country that rejected me and mine would change,” she continued. But that change did come. “I would never have thought it would be so when I walked into the first-grade classroom that changed my life.

“I trust that you will grow in ability to be impatient for positive change,” she told the seniors. “To discern the good from the merely adequate, to embrace the challenge of fighting for those who are less fortunate, to insist that your choices measure up to your values, and, in all things, to allow for the fact that change will come.

“Hope not for what is feasible, but for what is needed,” she urged students. “Work not for the best that you think you can do but for all that should be done. Fight, fight, fight for the rights of the many over the privilege of the few. Be what your education tells you that you can be: the best.”

Earlier in the day, Simmons had taken a lighter approach at the Hour with the President, raising the question that was on everyone’s minds: “What am I going to do next?”

“A lot of baby-sitting!” she answered, acknowledging that among the many Simmons relatives who’d come to see her celebrated that weekend was her four-year-old granddaughter. Held in a tent on Lincoln Field, the Hour with the President has its traditions, one of which is the presentation of a gift from reunion classes. This year Simmons accepted more than $98 million from alumni donors.

Totally without precedent, however, was the news that the Corporation had voted to rename Lincoln Field. Henceforth, the proclamation read, the field and the buildings surrounding it will be known as the Ruth J. Simmons Quadrangle.

Reader Responses to Seniors: Be the Best!