The Steel Yard—it’s a rare place where industry and art mingle, not just happily but fruitfully. 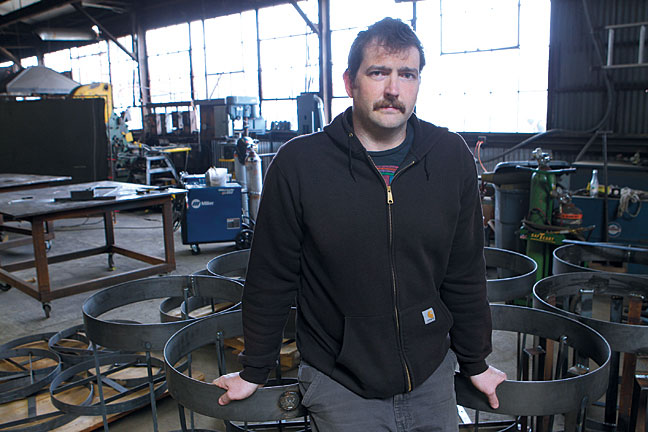 The Steel Yard’s founders—Clay Rockefeller ’03 and RISD grad Nick Bauta—imagined a place where local industrial artists could work together, learning from one another in the process. This spring, BAM intern Alexa Trearchis ’13 interviewed Rockefeller about the dream that’s now set in steel.

BAM Where did you get the idea for the Steel Yard?
CR During my sophomore year at Brown I discovered the sculpture studio in the basement of List. There was an incredibly supportive community of people who spent endless hours pushing one another and sharing their thoughts, ideas, and dreams. Around this time, the U.S. Army had launched its “Army of One” campaign, which was a strong tagline celebrating American individualism. I believed we needed to encourage people to work together instead of isolating themselves. 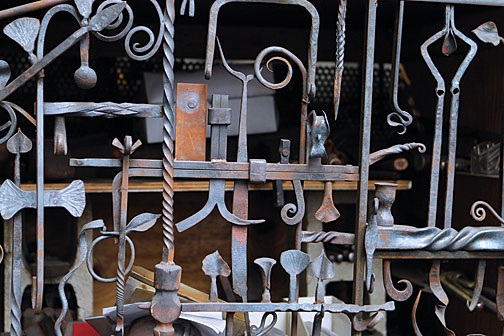 Frank Mullin
Examples of wrought ironwork in one of the class areas.

BAM You developed the Steel Yard as a student?
CR I spent the following summer dreaming about large, accessible, collective studio spaces and industrial arts educational centers where we would work to blur the line between art and industry, vocation and hobby. When I returned to school for my junior year I started to bounce these ideas around some of my peers, including Dave Cole ’00 and Zac Culbreth ’02. Professor Richard Fishman, who was quickly becoming a friend and the closest thing I had ever had to a mentor, offered nothing but enthusiastic support as it was becoming clear what it was I wanted to do. Within a couple of months a mutual friend introduced me to Nick Bauta, a fellow sculptor.

BAM You purchased a former steel and iron works, which had to involve a major cleanup.
CR We’ve managed to clean up three acres of environmentally contaminated industrial urban landscape and bring it back to life. Given the uphill battle we experienced to get the site physically where it is today, I would consider the project a huge success when looking at it through an urban land-use and environmental lens.

BAM I see Steel Yard trash cans and bike racks on the streets around Rhode Island. Who’s making those?
CR The Steel Yard has won and completed more than 100 contracts to design and fabricate one-of-a-kind trash cans, bike racks, tree guards, benches, playground gates, etc., that can be seen in Providence as well as other towns throughout Rhode Island. Each contract uses locally sourced materials and employs local artists and fabricators. The artists work with clients to design products that speak to the identity of the place where the pieces will ultimately be installed. As a result of keeping it local and not just ordering these products out of a catalogue, we’ve increased the number of people contributing to the built environment. 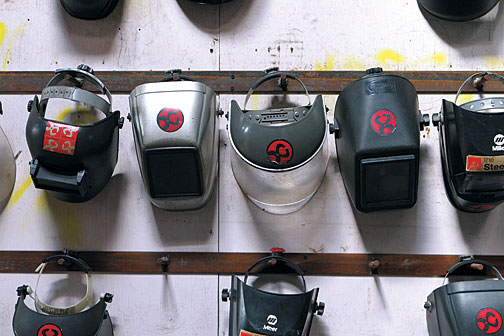 BAM Has the economy affected the Steel Yard’s mission?
CR The core of the organization has remained true to our original vision. That said, it has remained nimble and has evolved its programming to respond better to the ever-changing world in which it operates. For instance, over the years, as the financial crisis worsened, the Steel Yard increased its focus on job training. That has always been an element of our mission, but now we’ve created programming specifically devoted to workforce development.

BAM What’s the biggest reward?
CR From an educational perspective, the Steel Yard has taught countless people the benefits of working with their hands, and that they themselves have the capacity to fix what’s broken or to make something totally new from scratch.
For me personally, the Steel Yard is successful when someone comes here not really knowing what they’re getting into—just knowing that they’ve got to try something new—and walking out with, in some cases, a new direction in or perspective on life, and for others a new job or idea for a product.

BAM In this knowledge economy, some critics might say training people to work by hand is anachronistic. What do you say to that?
CR For much of the later part of the twentieth century, American culture has trended away from making things by hand. However, I don’t believe this approach to be sustainable. It’s in our DNA to work with our hands. I think people are thirsting for a better understanding of materials and how things are made.

It is the new energy, perspective, and ideas that people walk away with after having gotten involved with the Yard that is the most exciting to me. You can see it in their faces and hear it in their words. When it clicks, it clicks, and it’s life-changing.