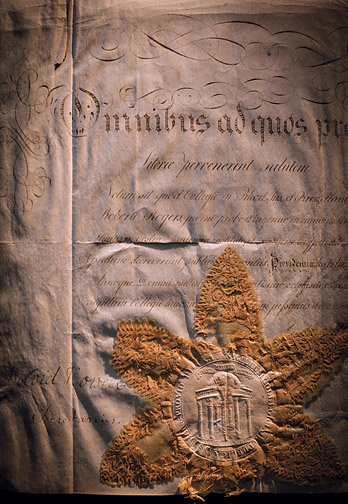 For four years the College Edifice housed revolutionary fighters, including George Washington’s troops. The College reopened in 1780, but before students could return, the building had become a hospital for injured French soldiers.
All this military activity took its toll. When the Corporation met after the war, it voted to bill Congress for damages; ten years later the U.S. government coughed up $2,779.13.
Then there was the matter of the seven seniors who’d been sent home back in 1776. In September 1782, the Corporation approved granting their degrees, including one to Robert Roberts, whose diploma is at right.
The revolution transformed the document. In the College seal at the center of the applique, busts of King George III and Queen Charlotte were replaced by a temple, and a Latin word in the name of the College was changed from Colonia to Republica. In this way, Brown became a truly American university.
Photo by Erik Gould.
What do you think?
See what other readers are saying about this article and add your voice.