Music from the Depths

Where the Knives Meet Between the Rows by Leigh Marble ’97 (Laughing Stock Records, 2012)

Leigh Marble was angry. It was a dark, relentless anger. In 2007, his girlfriend, Elena Wiesenthal ’98, was diagnosed with breast cancer, and suddenly hanging over the couple’s lives was “a feeling of constant impending doom,” as he describes it. Out of that fear and rage Marble created his third full-length album, Where the Knives Meet Between the Rows. 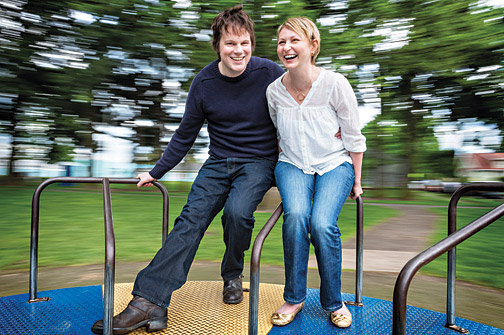 Jamie Bosworth
Leigh Marble and Elena Wiesenthal fight cancer with humor and music.
“Writing is my last option when I’m at the end of my rope,” Marble says. “So when I had nowhere else to go with these feelings—when I had exhausted the easy ways out—of drinking or taking antidepressants in order not to feel these things—I wrote what I was feeling, often quite bluntly, and turned them into these songs.”

While the Portland, Oregon-based Marble fought his demons in the studio, Wiesenthal underwent treatment, and in 2008 her cancer entered remission. The couple decided to start afresh: after many years together they married—“as a way to put it behind us,” Wiesenthal says. Their daughter, Vivian, was born last April. “It was a new phase of our life,” Wiesenthal says. “[We thought] maybe life won’t be as dark once our child comes into the world.” Given the darkness of Knives, she says, “It was important for Leigh to finish the record before I gave birth.”

The album’s opening track, “Walk,” begins with twenty seconds of a single melancholy note of feedback and the heartbeat-like thump of a tom-tom. “I’m gonna walk until the anger’s gone,” Marble sings. “Gonna walk into the setting sun.  “Gonna step into the anger ball and let it burn ’til it’s all done.”

The song is aggressive, Marble concedes. “It starts off in your face and doesn’t leave much of a silver lining.” But it was important, he says, that “Walk” be the opening track. “Here we are, in medias res. Boom. You’re in my shoes.” The tune also functions as an overture, laying out themes that run throughout the record.

In Knives, brooding vocals and a fuller instrumentation replace the dark-edged, experimental Americana sensibilities of Marble’s earlier records. That early work owed a debt to Wilco and Tom Waits. (“Steel-cut oats and billy goats, wrapped in a crunchy fuzz blanket” is how Marble describes his second album, Red Tornado). His plaintive baritone on Knives is more reminiscent of Magnetic Fields frontman Stephin Merritt.

On this new CD, even songs with lilting and sweet melodies have a dark edge. “I know you want to leave me,” he sings on the lullaby “Goodnight.” “Well, I want to leave me, too.” A song that sounds like a paean to a sparkling sunset turns out to be sinister. “The line of cars in the late afternoon glitters from here to the horizon,” Marble sings in the subdued waltz “Cars.” “It’s the sickest thing.… Making clouds of waste, skies of waste, mountains and valleys and oceans of waste.”

For all its edginess, the album does offer some reprieves. “Holden” is a send-up of Portland’s hipster poseurs, and “Pony” is a rollicking, laugh-out-loud rock anthem about an awkward sexual encounter. Despite its deep sadness, the dirge “Nail”—which Wiesenthal says she can’t listen to without crying—looks forward: “And there at the end of your rope,” Marble sings in haunting two-part harmony, “you’ll test the aerodynamics of hope.” 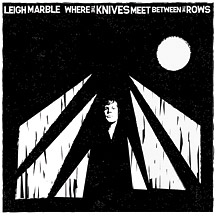 When Marble finished Knives, Wiesenthal was seven months pregnant. He planned a West Coast tour, sent copies of the record to the press, and booked a launch party.

And then Wiesenthal’s cancer returned.

She is undergoing another round of chemotherapy and radiation; her doctors tell her she’s lucky that in both instances she caught the disease early. Marble postponed his tour to stay home with his family. So far, the fragile optimism he struggled to achieve has been shaken but not destroyed. On his website, he is slowly letting his fans in on what he’s going through.

“You don’t want to feel like you’re exploiting it,” he says. “But at the same time, it just felt like a conspicuous absence without talking about what was really going on.” He’s working on new songs about this next phase of his journey, which he plans to take into the studio next winter.

“That’s part of the process for him,” says Wiesenthal. “Not just making music, but having people hear it. Having art affect people’s lives in some way, even for just a moment of a song.”

Reader Responses to Music from the Depths