Ah, summer. Classes are over. Exams are an ordeal you’d just as soon forget. You’ve been trapped in your room or hunkered down in a library carrel way too long. And then you notice the sun shining, the leaves greening, the temperature warming. What’s a twenty-year-old to do?

Over the summer I asked students to e-mail me describing how they spent their summer vacation. Some reported that, like generations before them, they needed money for school and so had no choice but to take paying jobs. Others were able to explore post-college life by working at internships. Some lucky students traveled. Others went off to do their bit to save the world. 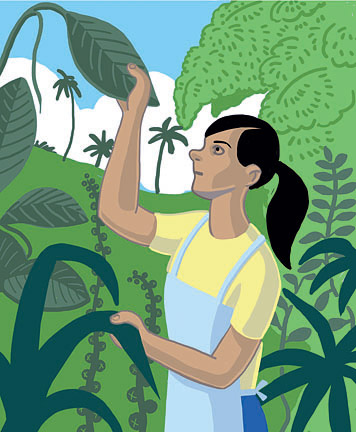 One thing they all have in common, though, is they returned to campus having learned at least a few life lessons. Some were even ready to hit the books.

“Not only have I discovered a different (and simpler) way of life,” Clare Kim ’15 wrote, “but also a new fire within me that craves the challenge of teaching and spreading understanding among pupils and peers alike.” Kim taught English in southern Poland as part of the student-run Learning Enterprises global volunteer program. She lived with a host family and, after her volunteer duties were met, had plenty of time to explore. “I have climbed a giant rock, floated on a raft down the Danube River, experienced the sorrow of Auschwitz, had my first beer, played hours of volleyball, sat through my first Catholic Mass, and made pierogis with my host grandma.”

Emily Davis ’15 also taught, but did so closer to home, volunteering with the student-led Brown Refugee Youth Tutoring and Enrichment (BRYTE) program in Providence. She worked with children from Myanmar, Malaysia, the Central African Republic, Tanzania, Nepal, Eritrea, the Democratic Republic of the Congo, and Iraq.

“A typical day for me at camp goes like this,” she wrote. “I arrive at 8:30 a.m. and set up my classroom (my very own classroom!). Then I go to the cafeteria, where the kids are getting dropped off, and I’m swarmed by kiddoes running up to me, shouting my name, hugging me, and asking me to play jump rope. (I am the unofficial Jump Rope Moderator.) The kids think absolutely anything is fun, and when I’m with them, I turn into a kid again, too.”

Onyebuchi Udozorh ’14 saw the summer as an opportunity to delve into research.  He went to London as part of the Brown International Scholars Program to study the role the visual arts have played in spreading news about medical advances. “Each week I create five medical illustration pieces that are influenced by the works and eras that I have researched,” he wrote.

Shayna Zema ’15 traveled to Colombia and Ecuador to study alternative medicine. “I had the opportunity to spend three Sabbaths with the Jewish community in the north of Bogotá,” she wrote, “and to speak with medical students about how using integrative medicine is how they aspire to link traditional healing and Western medicinal practice. I worked with a woman named Josefina learning so many natural remedies—even a mix of three herbs that can supposedly disintegrate a tumor!”

Quite unexpectedly, Zema continued, she wound up teaching yoga to “a group of gangster-looking kids of all ages, and then they wound up teaching me break dancing. It was so unexpected and was one of the most amazing experiences of my life. Some girls were my age, and we felt an instant connection despite our very different paths and pasts. I left feeling uplifted and could have easily spent months there. It’s weird how in a place that police are scared of, I’ve never felt safer!”

Other students parlayed their interest or experience in medicine into international volunteer work. David Stein  ’13 went to the city of Faridabad in northern India, where he journeyed through the surrounding rural areas in a mobile health clinic. “We traveled as a team of volunteers, doctors, and pharmacists,” he wrote. “This was an eye-opening experience because it showed me how many people in that area suffer from treatable illnesses that can be rectified with a simple visit from a doctor and some basic supplies.”

Brendon Esquibel ’15 MD went to Kenya in July as part of a delegation from His Mansion Ministries, a Christian group based in Deering, New Hampshire, that provides counseling and residential care for young people struggling with substance abuse. “The team will provide medical and dental care as a draw for people to hear the Gospel of Jesus Christ,” he wrote shortly before he left. “For me, this is simply an opportunity to serve and put to use the gifts I’ve been given as a medical student and future physician, as well as gain experience with medical missions.”

Stephanie Vasquez ’13 didn’t quite know what she was getting into when she signed up to intern at the children’s Craycroft Cancer Center in California. “I expected that spending a summer with young cancer patients would mature me into an ever-somber grown-up,” she wrote, “but as I reflect upon my experience, I find that the opposite is true.

“My young friends,” she continued, “have taught me that every morning is a good morning, super-heroes have no age-limit, and that we must always make the time to pause.”

Do you remember what you did on your summer vacation? What was your best college summer? Tell us about it in the comment section below this article at brownalumnimagazine.com