The Next Big Idea

Pop quiz: Which of the following start-up companies has the best chance of making billions?

JOJO A website where celebrities list their favorite clothes and fashion accessories for fans to buy. Users each get a “closet” in which they can store favorite items. 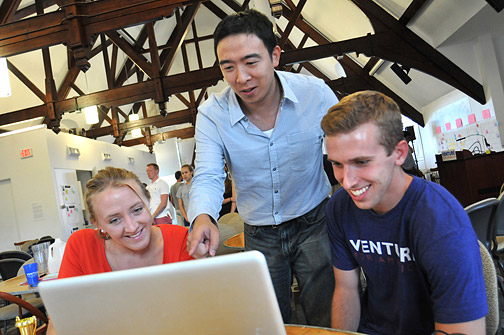 Frank Mullin
Andrew Yang '96, center, with Melanie Friedrichs '12 and Sean Lane during the Venture For America seminar.
Advertisers pay JoJo to direct them to shoppers who have selected wares the advertisers sell.

GET GARDENING A website that aims to simplify gardening. You input such things as the size of your lawn, the climate, what flowers and plants you’d like to grow, where existing trees create shade. The site then generates a detailed layout for the garden, the ideal greenery to plant, and a list of steps you will need to make your garden grow. Companies that sell the relevant products advertise on the site.

MINIVEND A company that proposes to install small vending machines in the backs of taxis to sell everything from energy bars to tissues to aspirin. You could also pay to use the electrical outlet powering the vending machines to charge your phone or computer.

These were among the ideas generated by participants in this summer’s VENTURE FOR AMERICA (VFA) training camp at Brown. The five-week-long program aims to prepare twenty- and thirty-somethings for careers at start-ups or as entrepreneurs. In this drill, teams of five had forty-eight hours to develop an idea for a successful business. A team of experienced business executives then chose which they would theoretically fund. “It was trial by fire,” says Melanie Friedrichs ’12. “It’s an intense challenge.”

VFA is the brainchild of Andrew Yang ’96, who a few years after graduating, started an Internet company celebrities could use to raise money for their pet charities. The company went under when the dot-com boom went bust. “We had a mini-rise and a maximum fall,” he says. “I had lost [my funders] hundreds of thousands of dollars. I realized there was much more I wanted to do, but wasn’t equipped to handle.”

In 2011, he started VFA, a nonprofit based on the Teach for America model. An elite group of roughly forty recent college grads would undergo business training camp and then be dispatched to selected start-ups, where they would work two years at a reduced salary, around $35,000. Employers would be in cities where business investment was sorely lacking, places like Detroit, Providence, New Orleans, Cincinnati, and Las Vegas. 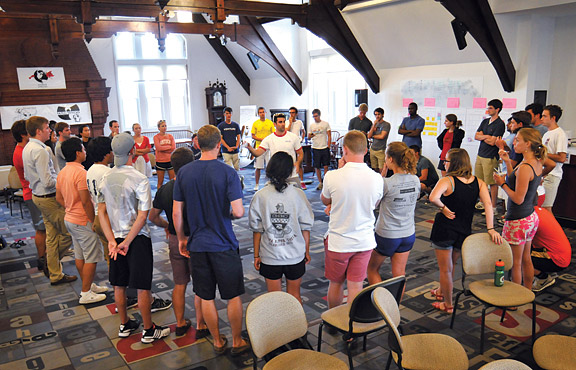 Frank Mullin
Recruits learn the ins and outs of start-ups.
“They are all cities that stand to benefit from entrepreneurs going there,” says Yang. The hope, he says, is that the VFA fellows will stay in the cities and start businesses of their own. “That’s how economies start growing,” he says.

This summer was the program’s first training camp. The fellows, who came from various schools around the country, heard lectures from experienced entrepreneurs, learned the ins and outs of financial modeling, and attended seminars on how to be a socially conscious business leader. In another drill, the recruits were given two-and-a-half days to redesign VFA’s website. They also had to sell T-shirts online for charity. “I was always skeptical of hackathons where people are thrown into a room and told to come up with an idea,” says Tim Dingman ’11, ’12 ScM. “But now I think they have a lot of value.”

As for the winner of the new-business-idea competition, it was Minivend for its proposal to put vending machines in taxis.“It was the most practical,” says Yang, “and had the most immediate chance of creating real jobs in the near future."

Reader Responses to The Next Big Idea