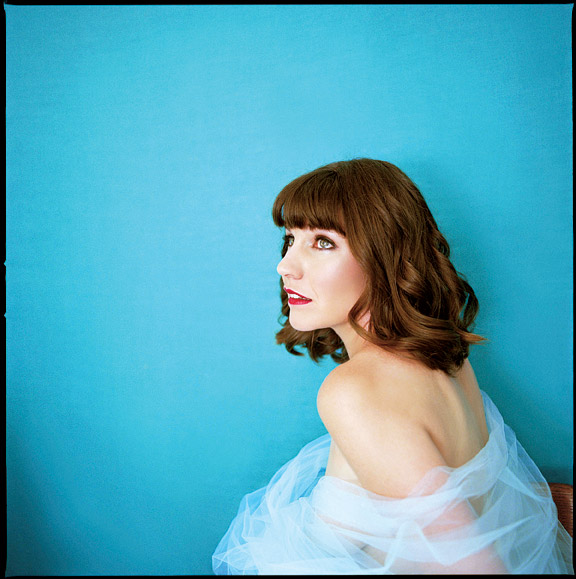 Courtesy Paracadute Records
"Love is the beginning and love is the end," sings Becky Stark.

“Thank you for breaking my heart,” Becky Stark ’98 sings on her CD Incorruptible Heart, recorded with her band, Lavender Diamond, and produced by Stark’s childhood friend Damian Kulash ’98. She’s not being sarcastic. “The breaking open allows your heart to open wider,” she says. “It can open you to a stronger, deeper love.”

“Eclectic” is the way to describe the music here. Or you could call it, imperfectly, neofolk or acoustic electronica. Despite its idiosyncrasies and wide range, the CD hangs together around one central idea: in Stark’s words, “reconciling what seems to be in pieces,” even—especially—“things that appear to be impossible to reconcile at first.” So when the track “Teach Me How to Waken” toggles between an aggressively electronic rock anthem and a quieter, more reflective lullaby (“Love is the beginning and love is the end”), it sounds like a journey through the songwriter’s own irreconcilable path.

Stark was raised in suburban Washington, D.C., by a mother who is both a teacher of metaphysics and a minister in the Unity church (which, according to the church’s website, teaches that “Heaven is not a place, but a state of consciousness; we create our own heaven and hell here and now.”). Her mother believed that school “has nothing to do with learning,” Stark says: “If I was studying a piece of music or literature, or if it was a beautiful day outside, I frequently wasn’t allowed to go to school if school was an interruption of what I was learning.”

At Brown, Stark had what she calls “a maximum experience,” studying music, semiotics, and Russian language and literature. She won a Royce Fellowship to write an operetta, The Well Wall, which made its debut at Performance Workshop. That was her first experience writing music. At a local mill building then known as Fort Thunder, she collaborated with performance artist Xander Marro ’98 on puppet shows in which Stark played a half-bird, half-human “emissary from the bird world who would bring peace to the planet,” as she puts it. She threw herself so wholeheartedly into these projects that she twice failed music theory, of all things, and left Brown one class short of a degree.
The bird, named Lavender Diamond, reappeared in another collaboration with Marro, a 2003 punk opera called The Birdsongs of the Bauharoque (a mash-up of Bauhaus and baroque). It gives its name to Stark’s current band, “a resonance of a particular intention to share an energy that is healing and that is loving,” Stark says.

The new CD’s sound changes not just from song to song, but from moment to moment, with tracks reminiscent of Tori Amos, Lou Reed, the Beatles, and Le Tigre, and an overlay of haunting electronica that Stark describes as a “broad, psychedelic sonic landscape.” So when the yearning melancholy of the opening tracks—the epic single “Everybody’s Heart’s Breaking Now” and the more subdued “Dragonfly”—give way to the foot-tapping 1970s-inflected “I Don’t Recall,” the sound embodies the idea at the heart of the project: that all the different pieces of a heart and a life can together make a beautiful, if complex, whole.

Reader Responses to A Stronger Love