Picture this: In a cozy U.S. classroom, preschoolers listen attentively as their teacher tells a story about a young bear struggling to catch fish. “How do you imagine this story might end?” the teacher asks.

“I think the bear should go to school and learn to catch fish there,” one boy replies.

“He should wear floaties and practice swimming in a pool first,” a girl suggests. 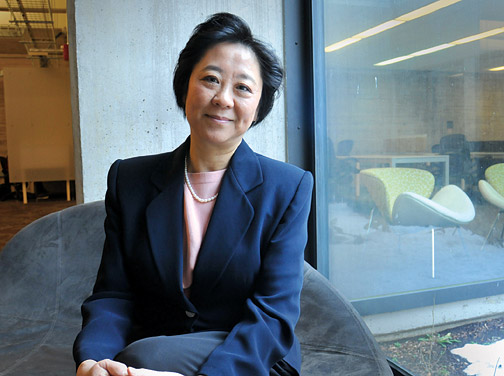 Frank Mullin
Raised in Maoist China, Jin Li says culture has as strong an effect on learning as schools do.

On the other side of the globe, in a classroom in China, a teacher presents the same tale, but the children’s response is very different. “The bear is too young” is a typical answer. “His claws are too small to catch any fish.” “He should go back and try harder.” “He lost his focus.”

In her book Cultural Foundations of Learning: East and West, Associate Professor of Education Jin Li offers these two discussions to demonstrate that, by the time they are four years old, children have already developed distinctive learning styles shaped by their cultures. “As learners we are products of our culture,” she says, “which has been passed down by generations of grandparents and parents.” That, she says, influences learning far more than any particular school curriculum.

For her research, Li studied thousands of children in both the East and West to discern how culture dictates educational values and beliefs. In the West, she says, curiosity, interest, enjoyment, and intrinsic motivation are paramount. But there’s a trade-off. Many Western students lack persistence, she says, and have low expectations along with an overinflated sense of self. In contrast, Asian students are taught to value perseverance, commitment, and humility, and with them the trade-off is a neglect of creativity.

Li’s personal experience sheds light on her research. Growing up in Communist China during Mao’s Cultural Revolution, she was in third grade when the Communists closed the country’s schools, proclaiming that intellectual work was a bourgeois evil, and that children should learn to plow fields and recite Maoist doctrine instead.

Ten years later, when the government began allowing schools to reopen, Li was one of a few hundred students to pass the difficult high school admission exam. But two years later the political wind shifted again, and she was sent to be “re-educated” far from her family in the Chinese countryside, where she planted rice and vegetables, administered acupuncture and herbal treatments to villagers, and taught children of all ages with scarce or no supplies.

When Chinese students were readmitted to universities following Mao’s death in 1976, Li was placed in the German studies program at the Guangzhou Institute of Foreign Languages, where she went on to teach. There she met an American academic she would later marry and with whom she moved to Vermont in 1985.

How she differed culturally from her fellow Americans became clear, she says, after she became a substitute high school teacher. “That was a startling experience,” she says. “It was such a beautiful learning environment, and yet the children did not want to learn. I realized then that my attitudes towards learning were very different, and I wanted to get to the bottom of that.”

After receiving a master’s in foreign-language education from the University of Pittsburgh, Li enrolled at Harvard’s Graduate School of Education, where she earned a second master’s, this one in administrative planning and social policy, and a doctorate in human development and psychology. In Cambridge, she studied her own cultural heritage.

“I knew a lot about Western culture,” she says, “but I had not spent any time studying China’s. Before Harvard, I was too angry with the Communists, and I could not distinguish culture from politics.”

It was while she lived with farmers in the Chinese countryside that she first observed the deep roots of cultural tradition. “These people struggled,” she recalls. “They were poor and under the thumb of the Communist Party. But they held on to their values, held their families together. Elders looked after their children, children respected their parents, and everyone followed traditional kinship relations. Communism didn’t change that.”

Asked whether she has combined Eastern and Western learning cultures in her own  family, Li laughs and refers to her son’s recent history exam. “He had a ninety-four and was very proud,” she says. “The Chinese mother in me wanted to ask him: what happened to the other six points? But I stopped myself.”

Li has been trying to embrace U.S. learning culture, but so far, she says, the transformation has been relatively superficial. “The beliefs that you don’t have to stretch to understand are the most powerful,” she says. “Things can change, but it takes time.”

Four young Brown alums are working to make the Ocean State a better place for working-class people.
The Arts