Aliya LeeKong ’00 gets a rush when she guts a squid. In 2008, while taking a course at the French Culinary Institute in New York City, she sliced off a squid’s tentacles. That’s when she decided to quit her corporate day job and become a professional chef. 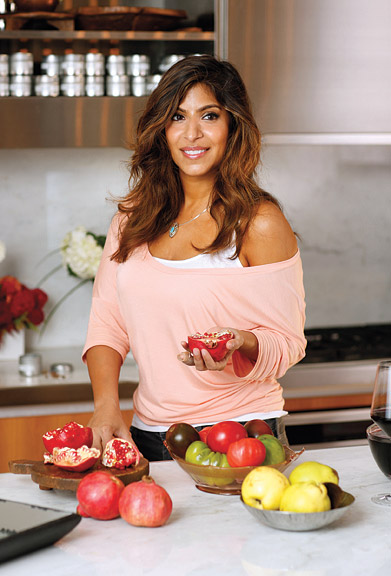 Courtesy Aliya LeeKong
LeeKong is chef and culinary creative director at Junoon, a modern Indian restaurant in Manhattan's Flatiron District.
Today, after working in such legendary restaurant kitchens as Jean-Georges, Devi, and Per Se, LeeKong is the chef and culinary creative director for the one-star Michelin-rated Junoon, a modern Indian restaurant in the Flatiron District of Manhattan. While searching for new spices and flavors around which to build recipes, she’s traveled to thirty-five countries, spending time with cooks from the Sacred Valley of Peru, the Turkish countryside, and Cape Town, South Africa.

American born, the daughter of Tanzanian and Pakistani immigrants, and the wife of a West-Indian American, LeeKong melds all these influences into dishes that she calls a reinvention of American style. She also hosts a blog, www.aliyaleekong.com, where she documents her years of traveling, cooking, and eating. The site features some of her specialties from all over the globe, including an East African awaze-marinade skirt steak with flavors of Ethiopian berbere and honey wine, and a West Indian scallop dish with spiced-brown-butter cassava root puree.

LeeKong, the daughter of two immigrants, grew up near Orlando, Florida. She cut her culinary teeth in her mother’s strict, loving kitchen, but even back then, LeeKong was a perfectionist, mastering such dishes as her mother’s South Asian crème caramel flan with saffron and cardamom. She quickly matured as a cook, though she admits that some basics, like her knife skills, were “zilch” until she attended culinary school. At Brown, LeeKong found she enjoyed having her friends over and making them simple pasta dishes or brewing a tea she created using cardamom and saffron.

She says there is a direct correlation between her passion for food and her love of being among family and friends: “You could go to a five-star restaurant and have an eighteen-course meal, or you could sit down with friends at home and enjoy a great meal with people you love. I focus on the home and the people important to me.”

LeeKong majored in economics and biology, and worked as an investment banker for five years after graduation. She then earned an MBA from Columbia, before realizing she didn’t find working in the business world very satisfying. Every night, she says, she would doff her formal work clothes and head to the kitchen, where she focused on her true passion—cooking international dishes.

“Cooking was my release from the corporate world,” she explains. “I didn’t realize you could turn your releases into a job.”

LeeKong began her kitchen work at the now-defunct American Elettaria in Manhattan, as well as at Bati, an Ethiopian restaurant in Brooklyn. Soon after, she paired up with one of her mentors at Devi, Indian chef de cuisine Walter D’Rozario, who lured her to Junoon with his own creations. Since it opened in 2010, Junoon’s menu has featured dishes from LeeKong’s own background.

“The tandoor dishes,” wrote Sam Sifton of the New York Times in 2011, “are delicate beneath their crusts: sweet lobster under a cloak of cumin, cayenne and lemon, with ground fennel; venison amped up on ginger and nutmeg. Lamb is given a wonderful send-off by the patthar, a style in which the meat is cooked on hot stones.”

LeeKong hopes soon to publish her first cookbook, Exotic Table, which is a reflection of her home life and her cook-what-you-love attitude. All her recipes are meant as guidance, she tells her readers, so they should feel free to experiment and have a little fun.

“I’m so excited about this book. I’m cooking it, photographing it, and writing it,” she says. “It’s important to finally put my thoughts down on paper and be able to share the experience.”