In 2009, Cambridge, Massachusetts, science journalist Maia Weinstock ’99 had a vision of planetary scientist Carolyn Porco as a Lego figurine. “How cool would it be to make minifigs” (as these things are known to Legophiles) “of current well-known scientists and science popularizers?” Weinstock thought. 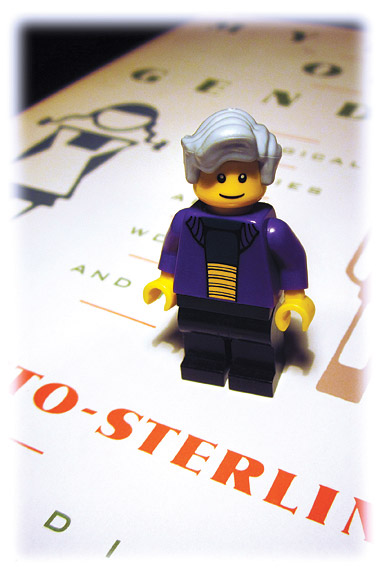 A longtime Lego buff, Weinstock has a collection of what she calls Scitweeps, which includes Richard Dawkins, Jane Goodall, Al Gore, Oliver Sachs, and the hosts of TV’s Mythbusters, Adam Savage and Jamie Hyneman.

Her newest Scitweep is Professor of Biology Anne Fausto-Sterling who was Weinstock’s academic adviser. Weinstock says that when she learned Fausto-Sterling tweets—a requirement for entry into her miniature scientific hall of fame—she immediately created a figure of her former mentor and gender studies expert.

The cheery-looking Fausto-Sterling pictured here stands atop her groundbreaking 1992 book, Myths of Gender.

The real Fausto-Sterling says she didn’t even know her Lego self existed until Weinstock tweeted about it. Asked if it’s a good likeness, Fausto-Sterling replied by e-mail, “I don’t think ‘a good likeness’ is what the artist is after. (After all my hair is really salt and pepper). It is the placement on the book cover, i.e., the whole piece, not just the Lego bit, that makes it fun and represents me.”

Reader Responses to Lego My Prof