Love at the Ratty

Quick question: Where would you most like to celebrate your 60th wedding anniversary? A fancy restaurant? A romantic bed and breakfast? Paris? How about the Ratty? 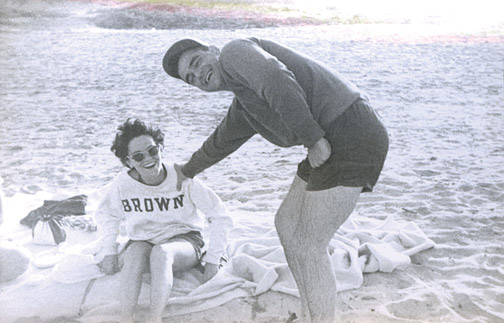 Courtesy Condaxis Family
The couple on the beach shortly after their engagement.

Actually, for William Condaxis ’55 and his wife, Frances Bellatoni Condaxis, that made perfect sense: the Ratty, or the Sharpe Refectory, as it’s formally known, is where they first met. He was a freshman washing dishes there, and she worked as a dietitian on the University payroll. Back then, the Ratty building was brand-new, and the central cafeteria was surrounded by eighteen private rooms, all but one of them reserved for fraternities. Student waiters brought large serving plates to the tables. Mealtimes were chaotic and very loud, but the couple’s love blossomed nonetheless.

After high school, Bill volunteered for the U.S. Navy Air Corps. When he started at Brown thanks to the G.I. Bill, “I was older than most of the students,” he says. He studied English and worked at the Ratty, alongside several of his Kappa Sigma fraternity buddies.

He actually started going out with a different Ratty dietitian first. “I started dating one, and married the other,” he says. By the time he graduated, he and Frances had a son, Peter. At Commencement, Bill carried Peter down the Hill wearing his own pint-sized cap and gown.

After graduating, Bill spent the next 25 years working for the now defunct Jordan Marsh Company in Boston. The couple had two more children and moved on to San Francisco and then Hong Kong before Bill retired in 1995.

The anniversary party, which took place on December 9, was arranged by their kids, Billy and Peter Condaxis and Paula Condaxis Angell ’78.

It took place in the Chancellor’s Dining Room, one of the rooms surrounding the Ratty’s cafeteria. The guests, who included several of Bill’s classmates and fraternity brothers, were waited on by Ratty staff.

As it happens, Paula Condaxis also found her spouse at Brown. She and classmate Rob Angell met in the Rockefeller Library when, by chance, they both came out of the fourth floor men’s and women’s restrooms at the same time.

Reader Responses to Love at the Ratty