The bombs didn’t stop, not even on Christmas night, when they fell less than two miles away. At Mother of Mercy Hospital in the village of Gidel in Sudan’s Nuba Mountains, Christian missionary Tom Catena ’86 kept working. As the only medical doctor at the only hospital in the entire region, he had little choice. 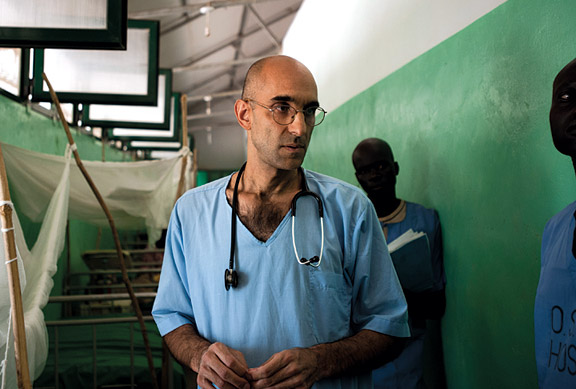 A war over oil had broken out in 2011 between Sudan and South Sudan, and Catena found himself in the middle of it. “When the fighting started, almost all of the expatriates that were here left,” Catena says. “For me, I think the initial thought was that in good conscience I can’t leave the hospital. I was the only doctor here. I’m still the only doctor, pretty much for all of the Nuba Mountains. For me, it was fairly simple. I could not live with myself if I just packed up and left the place and left all the people here in that situation.”

During the evacuation, Catena’s nurse anesthetist left. So did his lab technician and pharmacist. “Anybody that had any training was taking off,” Catena says. “I thought, ‘Let me just stay around, and I will do my best.’” Two nuns stayed behind to help him. Meanwhile victims from the bombings streamed to the hospital.

Catena, whom other doctors have praised as a modern-day Albert Schweitzer, praised the local Nuba people, who helped to pick up the slack. Although they had little formal education, they became Catena’s nurses, assisting him as he performed surgery. He says he probably performs more than a thousand operations a year at the hospital. “People survived, much to our disbelief,” he says. “That gave us confidence, and we kept going.”

For Catena, who lives with his staff in a concrete building near the hospital, a typical day starts at 6:30 with morning Mass. He begins rounds at 7:30. The hospital has 300 beds, but sometimes there are so many patients they must sleep two or three to a bed. On some days there is no water; on others, no electricity. “You get worn out,” he says. “You get tired. You get frustrated.”

Catena remains on call throughout the night. With no administrative staff, he also uses the evenings to order supplies and keep patient records up-to-date. Despite the fatigue and the stress, he persists. “Some days are better than others,” he says. “I enjoy the work, but some days it is drudgery. Whether terrible things happen or whether we are in danger or there is no food, the idea is we are here to serve. It is as simple as that.”

Catena’s Christian faith was apparent even at Brown, where Campus Crusade for Christ director Kent Dahlberg was a mentor and spiritual teacher. A mechanical engineering concentrator, Catena excelled academically and was a Rhodes Scholar candidate. He was also a good athlete, an Associated Press honorable mention All-American football player, and a first-team All-Ivy pick as a defensive lineman. As a senior in 1985, he helped the Brown defense post shutouts in four of its seven Ivy League contests. His nickname was Catman.

“Quite simply, he’s the nicest, most unselfish person I know,” says George Reilly ’87, Catena’s teammate and fraternity brother. “In college he was my spiritual mentor, my super-tough teammate, my big brother, my comic relief. He led a Bible study in our fraternity and always led by example. He walked the walk.”

Teammate Ted Moskala ’86 recalls that Catena was small for a defensive lineman. “But he was strong, and he was extremely quick,” he adds.

Against a powerful Rhode Island team, Catena sacked Ram quarterback Tom Ehrhardt for a safety to lead Brown to a 32–27 upset win. On senior day in his final home game, he registered three sacks as Brown blanked Columbia, 34–0. “If you could combine Mother Teresa and Mean Joe Greene,” says Reilly, “you’d get Catman. He makes us all want to be better people. I tell my three daughters stories about him because he epitomized what a student-athlete is all about.” The Ivy Football Association recognized Catena for his selflessness at its annual New York City dinner on February 7.

After Brown, Catena felt called to missionary work. Realizing that in the mid-1980s opportunities for someone with his training were limited, he decided to go to medical school at Duke on a U.S. Navy scholarship. “I’ve always had an interest in other people and cultures,” he says, “and I felt called to use my abilities to serve those people.”

It was during his fourth year at Duke that he went on his first mission to Kenya. If he had any doubts about what he wanted to do with the rest of his life, they vanished in Kenya. His two months there, he says, “sort of cemented my belief. For me it was such exciting work:  you got to do all kinds of different things medically. You were dealing with a population that had very little access to health care. For me this was what medicine was about.”

After graduating, he completed his navy commitment and did a postgraduate residency in Indiana. “During that time I was, of course, still interested in doing mission work,” he says, “so I was looking for organizations that would sponsor doctors, and I came across the Catholic Medical Mission Board.”

He spent a month in Guyana, which was followed by another month in Honduras. When he finished his residency in 1999, he decided to continue volunteering with the Catholic Medical Mission Board and spent two years in rural Kenya at Mutoma Hospital. He then volunteered for the next six years at St. Mary’s Hospital in Nairobi before helping establish the Mother of Mercy Hospital in southern Sudan in 2007.

The hospital’s resources were strained from the start, as victims of fighting in Darfur and, later, central and southern Sudan arrived seeking medical care. Catena twice contracted malaria in the months after the hospital opened, and he lost fifty pounds.

Catena can’t imagine leaving the country. “I’d like to stay here long term, God willing,” he says, “although I realize that this place is unstable and the situation could change any day. My plan is to stay as long as it takes to make the hospital a stable institution.”

Does he ever fear for his life? “Yes, there have been times when I thought maybe the end was coming near,” Catena says. “Despite this, I think when it’s our time to leave this earth, it’s just our time to go and not to worry about it so much. Let me do what I can while I’m still here.”

Read more about Catena and Mother of Mercy Hospital at http://cmmb.org/supporting-mother-mercy-hospital

Reader Responses to On a Mission