In much of the world, boys go to school and girls stay home. Worldwide, more than 115 million children between the ages of six and twelve are not in school, 60 percent of them girls. And yet sending girls to school can be an important factor in a country’s well-being. 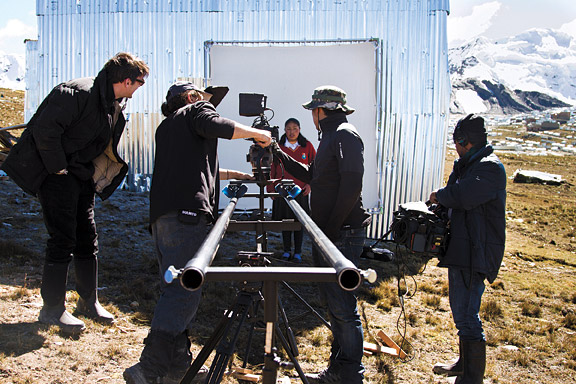 Gina Nemirofsky
In the Andes, the crew films Senna, a budding poet who fights to be educated.
“No matter who you talk to in the field of poverty alleviation,” says Holly Gordon, “if you want to drive up GDP, if you want to change health outcomes, if you want to break cycles of poverty, educating girls is the best investment you can make.”

Gordon ’93, a producer at ABC News for twelve years, is the executive producer of Girl Rising, which tells the story of how education transformed the lives of ten girls from ten different developing countries. Each girl’s story is written by an accomplished writer from her country. (Edwidge Danticat ’93 MFA, for example, tells the story of the girl from Haiti.) The film, which grew out of Gordon’s work at the independent production company The Documentary Group, debuts in March to coincide with International Women’s Day.

Part journalism, part poetry, the approaches in Girl Rising’s ten segments are as varied as their writers. Each story is about ten minutes long and has “its own look and feel and flow,” says Gordon. Actors such as Anne Hathaway, Selena Gomez, and Alicia Keys narrate the stories while we watch the girls doing what young girls do: play, draw, bicycle, do chores, and, crucially, attend school. The cinematography is rich with color and imagery.

“Here, it is said that if a girl is married too young, she is in danger of being ‘split’ by her husband,” Meryl Streep reads, as we see a young Ethiopian girl and her friends clap and play under a hazy blue sky. Ethiopian writer Maaza Mengiste writes about this girl, Azmera, who, with the support of her elder brother, turns down a marriage proposal at age twelve so she can attend school. 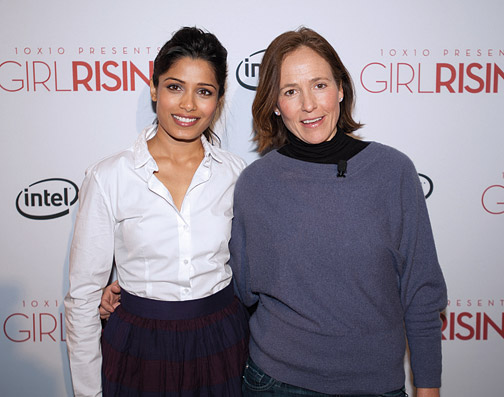 “What does it mean to ‘split’ a girl?” Streep continues. “Is it like tearing a photo down the middle, while each half witnesses the making of a ghost?” And as Azmera and her classmates, sitting in a thatch schoolhouse, close their books and walk out into the sunshine, Streep says, “You are a girl who has used her voice to say no. And every time you open a book, you continue your journey forward, and up.”

Girl Rising is one piece of an interactive social action project called 10x10. Its website, 10x10act.org, allows users to link to nine NGO partners, including Room to Read and Partners in Health, that provide education to girls in developing countries. The idea, Gordon says, is to draw “a through-line from the story itself to the opportunity to let your audience take an action.” Awareness is great, she says, but even better is “action that has measurable outcomes, measurable improvements in society.” She hopes to raise $15 million from visitors to the 10x10 website.

Girl Rising debuts in theaters in a handful of major cities, and 10x10 is using Gathr.us—a site that lets viewers indicate interest in a film—to bring it elsewhere. On television, Girl Rising will be one of the first major projects of CNN’s new film division. The network will air six weeks of special reporting on girls’ and women’s issues in the lead-up to the film.

Get more information at 10x10act.org.

Five minutes with Mark Agostini ’18 AM
The Arts

The art and science of presidential speechwriting

Reader Responses to School For Girls