In 2009, Pedro Noguera, one of the country’s leading education experts, was asked by New Jersey Governor Jon Corzine and Newark school superintendent Clifford Janey to take on a daunting task: turn Newark’s failing schools around. Noguera began by forming the Global Village School Zone (GVSZ), a consortium of seven low-income schools, to test his proposals. He and his collaborators added ninety minutes to the school day, decentralized decision making, and had the schools provide social services. 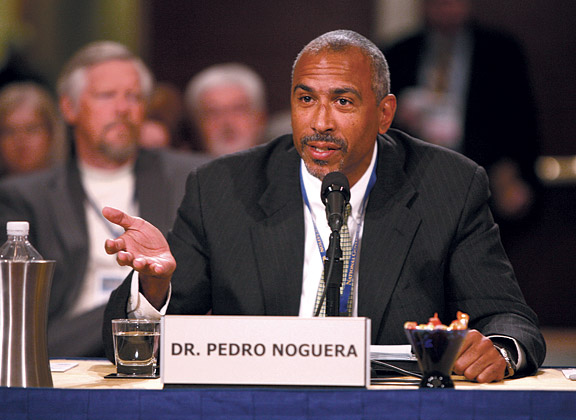 “Our hope,” he wrote in an online posting, “was that we could transform teaching and learning within schools while simultaneously addressing the external conditions related to poverty—poor health and nutrition, crime, housing instability, etc., that often undermine reform efforts.”

But three years later, Noguera says, the appointment of a less-sympathetic school superintendent in Newark led to the shut down of the GVSZ. For Noguera, a sociologist and the executive director of the Metropolitan Center for Urban Education at New York University, it was another instance of what happens to many education reformers: a sweeping vision of high-quality education for the urban poor runs up against political realities.

But Noguera is not discouraged. During a career spent researching education in the inner city, Noguera has long criticized school administrators for taking a piecemeal approach to education reform rather than going after the root cause of bad urban education, which he sees as poverty.

In his 2008 book, The Trouble With Black Boys ... And Other Reflections on Race, Equity, and the Future of Public Education, he argued that teachers are often insensitive to the needs and experiences of African American males, singling them out for harsh punishment and assuming from the outset that they will perform poorly in school. But he also faulted peer pressure among blacks, which he said didn’t put enough emphasis on academic achievement. (He spoke about the issues facing black boys in a February 12 interview on National Public Radio; you can hear it at npr.org.)

Noguera, who has Afro-Caribbean roots, grew up in a family of eight in Brooklyn. His father worked as a cop and a taxi driver. At Brown, Noguera initially felt uncomfortable around his wealthy classmates. “I felt like I was in deep water, like I was not prepared for the experience,” he says.

He got over the inferiority complex by joining the rugby team that included John F. Kennedy Jr. ’83 and Brian Moynihan ’81, now CEO of Bank of America. “It was from interacting with them,” he says, “that I realized they were regular people and that I wasn’t inferior to them. What Brown did for me was really expand my horizons.”

He also credits the late Brown sociologist Martin Martel for encouraging him to pursue a future in urban education. After short stints teaching high school in Providence and Oakland, California, he earned a doctorate in sociology from UC Berkeley.

Noguera believes all kids can learn and every school can be turned around. “It’s not hard to see when a school is failing. It’s hard to get agreement to change,” he says. “It’s like an alcoholic recognizing that there’s a problem. Then they have to see that something else is better.” During his time in Newark, for example, eleventh-grade scores on standardized literacy and math exams shot up 32 percent and 26 percent, respectively. By 2011, the graduation rate at Central High School had risen to 82 percent, far above the district average of 61 percent.

And Noguera is a critic of charter schools when they compete with public schools for scarce resources. In February 2012, he resigned in protest from the State University of New York Board of Trustees, which approves creation of the state’s charter schools. He believed the trustees were using them to create an alternative to the public school system, even though, as he saw it, charter schools were intended to supplement it.

“The reason I support [charter schools],” he says, “is that they allow educators to design a vision and be free of bureaucracy. The original idea of charters is that they would serve as the R&D of public education.”

Despite these frustrations, Noguera continues to take on additional projects to redress inequity in the schools. In December, he joined the board of Year Up, a nonprofit group that helps teens and young adults earn college credits and find internships.

A pair of Brown alums–turned–local-officials lead the way on green energy.
Business & Entrepreneurship

Reader Responses to Solving the Problem