I stepped onto the manicured lawn with caution, unsure that I was in the right place. The event was a garden party celebrating the end of another theatrical season, and I was there as an actor and playwright in Massachusetts. In addition, my boss, then Massachusetts Republican Senator Scott Brown, had also asked me to attend on behalf of his office. It was an unlikely meeting of my two work worlds. 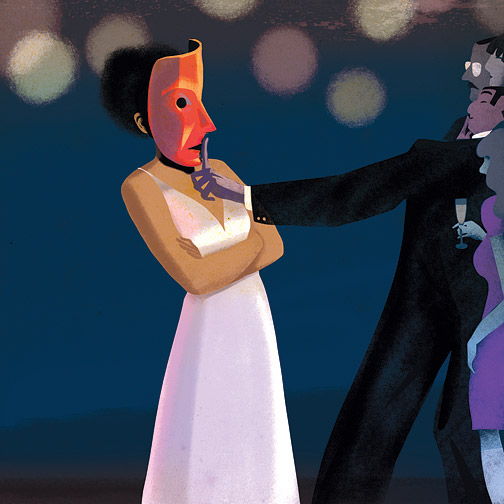 The party’s host, a slight woman with eager blue eyes, led me across the garden, and we exchanged niceties. When we arrived at a group of theater administrators huddled in conversation, she enthusiastically explained that I was a theater artist and a representative from the senator’s office.

The warmth drained from their faces. Theater professionals tend to lean liberal. Furrowed brows and quizzical glints in their eyes made it clear to me what they were thinking: But how can you work for a Republican? No matter that I am actually registered as an Independent.

It was a cold and familiar shift. This group, when introduced to my six-foot-tall, African American, Ivy League–educated, world-traveled self, had perceived me as one thing. I could see they were now reassessing me as someone very different. My status as an outsider quickly solidified. We made polite and convivial conversation, but something had definitely changed. I call it the shift—the change that happens when stereotypes about who I am collide with who I actually am.

Growing up, I went to school in a predominately white, affluent suburban community. I loved the town and accepted it as my adoptive home. The shift was there, too, though. After I won every graduation award at my high school, a white parent asked me who I thought I was to take everything and leave nothing for anyone else. Although I believed I was a part of his community, his words made me feel like a greedy outsider taking more than my share.

In my travels around Europe, the shift surfaced when the United States’s international reputation dipped and being a citizen triggered a new and cold skepticism. The assumption was that I somehow supported everything thought to be wrong about America. And now, in my home country, I find myself presumed to be a Democrat simply because of my skin color.

At Brown, I studied a quiet literary heroine named Lady Mary Wortley Montagu. Lady Mary’s letters from Turkey document her discoveries as a diplomat’s wife in Istanbul, where she immersed herself in the culture of Islamic women, who were sheathed from the Western world and often prejudged by it. She chatted up husbands and followed harem women into Islamic bathhouses, one of the few places where women could talk freely and openly. In her letters, she found similarities between Eastern and Western women and challenged the reigning stereotypes by writing about her findings. She willingly wore a veil in public, boldly claiming, in direct opposition to common perception, “Nowhere else were women as free as they were in the Ottoman Empire.”

Despite the inspiration and shared sense of being an outsider that I draw from Lady Mary, the shift still unnerves me. Its very existence speaks to our need to assign labels and create categories that we profess to shun in the name of progressivism. I will continue to identify with various groups in my life, but it is my fierce individuality that makes me of any value to those groups. For it is only in the cracks between dividing lines that I’ve come to understand both the great cost and the greater value of being an individual. And it is in that space only that I can ever claim to be truly free.

Miranda Craigwell lives in Dorchester, Massachusetts, and recently finished a playwriting fellowship at the Huntington Theatre in Boston.

Brown scholars on Critical Race Theory, the most divisive topic in American education
The Arts

Reader Responses to When Expectations Collide