In most stories about men who suffer midlife crises, husbands leave their wives for younger women or buy expensive, flashy sports cars. Jonathan Bastian ’89 became a cop, enrolling in the police academy in 2004. “I was the grandpa of my class,” he says. But a few years later, there he was, a thirty-seven-year-old rookie police officer, patrolling the streets of Lexington, Kentucky. 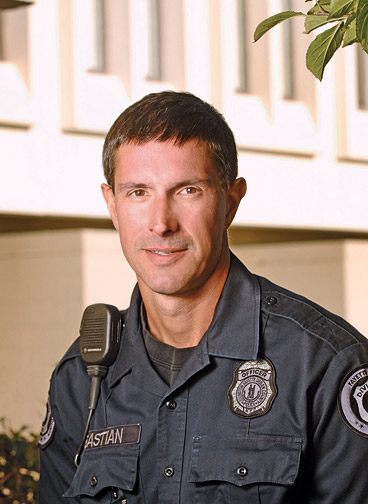 Courtesy Jonathan Bastian
Bastian found happiness patrolling the streets of Lexington, Kentucky.
Today, Bastian is a sergeant who manages six beat cops and polices an area that includes downtown, the University of Kentucky, and low-income neighborhoods with a reputation for drug deals and prostitution. In 2011, there were fourteen murders in Lexington, which has a fairly low crime rate for a city of 295,000.

“The great thing about the job is that there’s no such thing as a typical day,” Bastian says. “There’s not been a single day in the last [eight] years where I said I wish I didn’t have to go to work today.”

Bastian matriculated intending to become a surgeon, but at freshman orientation he was discouraged by the strict course requirements for medical school. “They said, ‘Here are the twenty-six courses you have to take,’” he says. “But that totally defeats the purpose of going to Brown. There’s no point going to Brown if they eliminate all choice.” Instead, he double-majored in international relations and business economics. Outside class, he joined the University’s EMS corps.

After graduation, Bastian taught high school math and history for three years before settling into a job as the export manager for Testors, a Rockford, Illinois, company that makes paint and glue used on hobbyists’ model planes and cars. On the side, Bastian volunteered as a local firefighter.

For twelve years Bastian voluntarily rushed into burning buildings. Perhaps his most dramatic moment came during a blaze at a single-family home when he found a trapped seven-year-old girl. He was the first to enter the fire and, though he could barely see through the smoke, he was able to rescue her from her bedroom.

“Being presented with an environment that’s unpredictable requires you to make a lot of quick decisions,” Bastian says. “It’s a stress, but it’s a stress that can generate good feelings.”

It’s not much of a leap to go from firefighter to cop, a decision he made when he relocated to Lexington in 2002 for his job. “I had earned money and moved up the ladder,” says Bastian, the married father of two. “But I wasn’t any happier.”

When there’s a murder or serious felony in Lexington, Bastian arrives to make sure that evidence is properly collected, potential witnesses are identified, and suspects, if caught, are informed of their rights and interviewed properly.

Often his work is helping his officers figure out if a crime has actually taken place. For instance, a small-business owner may dispute how a partner spends money in the company’s account, but resolving the matter might require civil litigation, not police intervention.

“I won’t be so dramatic as to say you change a life every day, because that’s not true,” he says. “But there are moments where you recognize that your actions, your decisions, have truly made a difference to somebody.”

The art and science of presidential speechwriting
Humanities & Culture

Reader Responses to On the Beat