ALUMS IN THE STATE DEPT: Breaking from Past History

Richard Olson ’81 has had his eye on Pakistan for more than a decade. He watched the September 11, 2001, terrorist attacks from his post as U.S. consul general in Dubai. He knew in that moment that the relationship between the United States and Pakistan had just changed fundamentally. Pakistan, he realized, had just become “a country on the front lines of the war on terror.” 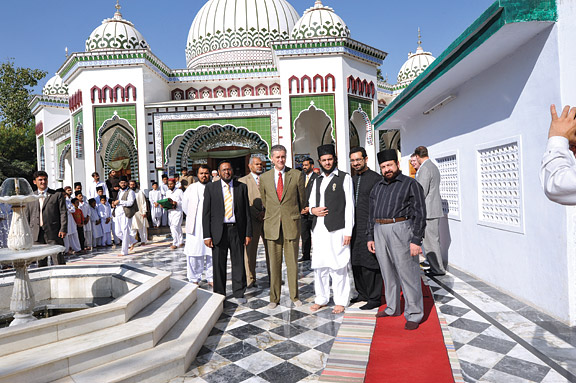 U.S. State Department
As Ambassador to Pakistan, Olson, seen here at a shrine near Rawalpindi, spends much of his time exchanging views with spiritual and civic leaders.

Olson, a foreign service officer, subsequently served in Najaf, Iraq; Kabul, Afghanistan; and then back in Dubai again. He developed a close working relationship with Richard Holbrooke ’62, and as an ambassador to the United Arab Emirates, he received Daniel Pearl’s widow, Mariane Pearl. During all this time, he says, Pakistan “loomed large.”

“Pakistan has been living with war in Afghanistan for thirty years, and there is a feeling that the outside world doesn’t appreciate how hard that has been, or the costs it has imposed on Pakistan, ” Olson says. So when he was sworn in as U.S. Ambassador to Pakistan in September, one of his key goals, he says, was “to convince Pakistanis that the security transition in Afghanistan in 2014 [when the United States will hand over Afghanistan’s security to Afghan forces] will not be a repeat of what happened when the Soviets left Afghanistan in 1989.”

With that in mind, he delivered a major speech at the Institute for Strategic Studies in Islamabad in January: “2014 is not 1989,” he said. “We recognize the mistakes of the past. The United States will not disengage from the region.”

Being mindful of history is part of what drew Olson to the foreign service. He grew up traveling the world. His dad, an engineer, moved the family to Venezuela and then to Paris before they settled in Minneapolis when Olson was twelve. Living in Minnesota, Olson jokes, “I decided that I wanted to go back to France.”

He took the foreign service exam while he was a student at Brown and joined in 1982, a year after he graduated. “I have always been fascinated by history,” Olson says, “and get energy from the sense of participating in events that will one day be regarded as of historical importance.” His daughter, Ana Olson ’14, says that wherever her family was posted when she was growing up, her dad would take her and her sister on educational trips to local battlefields and other sites. “He gets really immersed into the history of a place,” she says. “To this day, my sister and I would win any trivia bowl.”

Given how varied the life of an ambassador is, Olson says there is no typical day: “One of the great things about being a foreign service officer is that no two days are exactly the same.” On a recent Friday, he started the morning with a meeting with his senior staff, then met with the head of the Pakistani Board of Investment, participated in a human rights roundtable, met with the Pakistani press, and dined with the Swiss ambassador.

“There tends to be a little bit of a perception, to people who are not diplomats, that we just go to parties,” Olson says. “And we do a certain amount of representational work—it is our job to go out and meet people in informal settings. But what most U.S. ambassadors regard as the core element of their job is policy management.”

The United States plays a key role in many economic and policy issues in Pakistan, including energy, economics, water rights, counter-terrorism and law enforcement, nuclear nonproliferation, and defense. Olson participates in bilateral working groups with top Pakistani officials in all of these areas, and also oversees billions of dollars in U.S. aid. The money, he says, is used to build roads, hospitals, and schools, as well as to fund irrigation projects, support educational exchanges and scholarship programs, and modernize and upgrade power plants.

Still, as Olson frankly acknowledged in his January speech, “I do not deny that some distrust still lingers on both sides between the United States and Pakistan.” He sees it as part of his job to change that.

I spend a lot of time on talk shows, being interviewed, making public appearances, a lot of time out there trying to portray a more balanced and positive image of the United States,” he says. “Diplomacy, at the end of the day, is about making your best case to as many people as you can, so that’s what I do.”

Reader Responses to ALUMS IN THE STATE DEPT: Breaking from Past History