In April, Brown’s three-year-old School of Engineering announced a $160 million fund-raising campaign given a huge lift by $35 million in donations from two former engineering concentrators, Brown fellow Theresia Gouw ’90, and trustee Charles H. Giancarlo ’79 and his wife, Dianne G. Giancarlo. Another $9 million came from anonymous donors, bringing the lead gifts up to $44 million. 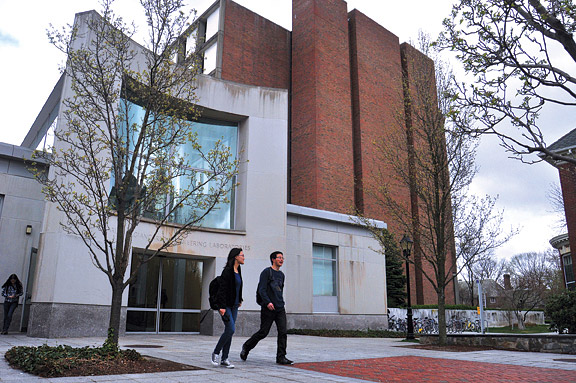 Frank Mullin
A new $160 million fund-raising campaign will allow the School of Engineering to improve facilities and expand faculty.
Giancarlo is managing director at Silver Lake Partners, while Gouw is a managing partner in the venture capital firm Accel Partners. Gouw says her gift honors longtime engineering professor Barrett Hazeltine, who encouraged her to pursue engineering and whose business and entrepreneurship courses have inspired countless students during the past half-century. Although Hazeltine became an emeritus professor in 2000, he continues to teach as an adjunct professor.

“I feel very fortunate to have gone from a first-generation immigrant on financial aid to being in a position to support the school that has been so significant in shaping my life and career,” Gouw said in a press release.

Established in 1847, Brown’s engineering program is the oldest in the Ivy League. Interdisciplinary research has been one of its hallmarks, and in the past decade Brown has become a leader in such emerging fields as nanotechnology, computer vision, and biomedical and environmental engineering, all of which require close collaboration between engineering faculty and students and those in a wide range of other disciplines.

To continue that collaboration, planners backed off on a plan to move the new school off campus. Instead, Brown will renovate existing labs and classrooms and build new teaching and research facilities on campus. The expansion will include the creation of a Center for Entrepreneurship and the addition of fifteen faculty members.