There are lots of ways to tell a story. Anne McClain ’05 tries to “encapsulate visual information into smell.” She creates her olfactory narratives in a cool, elegant studio in Greenpoint, a newly fashionable industrial section of Brooklyn, in New York City. Founded in 2009, her perfume company, MCMC, has been featured in the New York Times, Wallpaper, and GQ, as well as on websites such as Coolhunting. 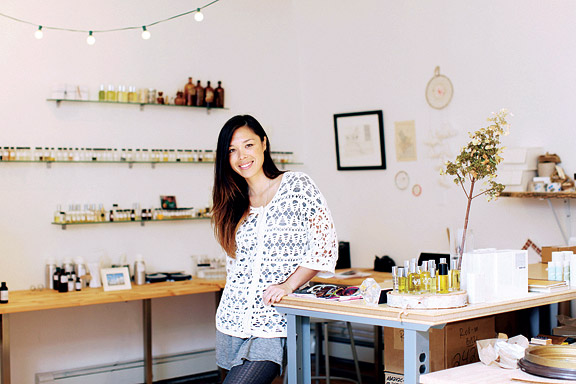 Britton Cailloutte
Anne McClain mixes perfumes by hand in her New York City studio.
At Brown, before she discovered the evocative power of scent, McClain concentrated in visual arts, studying painting, bookmaking, and developmental studies. After graduation, she worked in interior design and photography until a class on natural perfume-making led to a hobby, which in turn inspired her to matriculate at the prestigious Grasse Institute of Perfumery in Provence, France.

Becoming a perfumer, McClain says, was the perfect way for her to tell stories as well as to engage in the world around her. Her first fragrance, which she called Noble, was inspired by a semester spent in Nepal. It mixes the scents of Indian jasmine, Haitian vetiver, chai tea, incense, and musk to evoke Nepal’s spirituality.

The olfactory sense is closest to emotion and memory, McClain says. Each of the seven fragrances in her “Story” collection has a narrative: each is based on places she’s been, people she’s met, and even concepts. She describes the heady, mysterious, rose-heavy scent Kept, for instance, as “an ode to oneself.” The witty Dude No. 1 is a “beard oil” perfect for Greenpoint hipsters.

For those who like scents but don’t wear them, McClain makes candles that are vegetable-based. Unlike commercial perfume juggernauts, the MCMC “factory” is the small studio where McClain handcrafts the scents herself, using natural materials that are certified organic whenever possible. Her sister, Katie ’07, joined the company in 2012 as director of operations. All the bottling is done in-house, although as demand has grown, their parents—Brown history professor Jim McClain and Jung-Kang McClain ’82—have been known to drive down from Providence to pitch in.

MCMC has a social component as well. Inspired by a volunteer trip Anne and Katie took to an orphanage near Siem Reap, Cambodia, McClain created two perfumes, Savann and Amara, which are the first in a series called the Humanity Project. The retailer Anthropologie has exclusive rights to sell the two scents, and a portion of the proceeds will return to the orphanage. In addition, Garden, an organic-oil perfume roll-on, returns half its profits to Ananda Harvest, a farm in upstate New York.

When asked if a “Brown” scent might be in the works, McClain laughed and said she hadn’t considered it, but her eyes lit up as she imagined how she might construct one: the scents of ivy, crisp—preppy—citrus, perhaps French seaweed for a nautical touch? Already her nose was at work.

Reader Responses to The Memory Factory