The Top One Percent

Combine a laid-back California-cool attitude with an aggressive-but-patient hitting style and you begin to understand what makes standout softball player Stephanie Thompson ’13 different. As a sophomore in 2011, Thompson, who is from Chino, California, had the highest women’s softball batting average in the country: .504. Last season, she hit .477, good enough for second, despite playing with a partially torn patellar tendon. 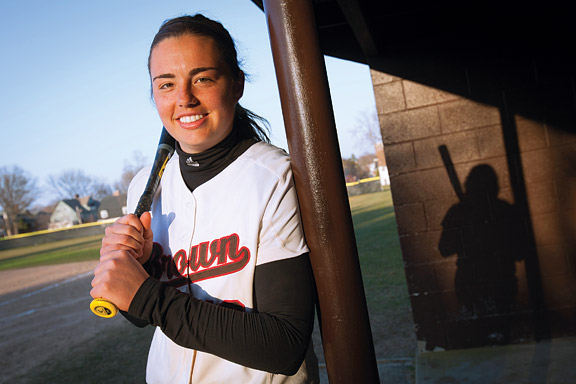 Scott Kingsley
As a sophomore, Stephanie Thompson batted .504-the best in the country.
Now pitchers are walking her.
The injury notwithstanding—she had surgery a few days into the off-season and is back to full strength—the drop in average also reflected the care with which opposing pitchers now treat her. Thompson drew twenty-five walks in thirty-seven games last year.

“It is very hard for her,” says Brown head softball coach Katie Flynn, “because she doesn’t get many pitches to hit.”

As a result, Thompson says she was forced to alter her aggressive hitting style and take more pitches for walks. Her plate discipline was also evident in that she had the third-lowest strikeout rate in the country, fanning only twice in 107 at bats. While this waiting game might frustrate most players, she says she will happily take a walk and trust that teammates hitting behind her will help her score.
“I’ve got to keep realistic goals and have productive at bats, whether it is a hit or not—just try to help the team in any way I can,” Thompson says. (She was hitting .354 in late April.)

“Steph is not the type of player who can be easily upset or thrown off,” outfielder Avery Silverstein ’13 says. “She has a very strong mental game.”

“An Ivy League coach told me, ‘She could hit for any team in the country, including Pac-12 teams like Cal and Stanford,’ and they are right,” says Flynn, who places Thompson among the best players she has seen. “She is in the top one percent in all areas—as a person, as an athlete, definitely as a hitter.”

Thompson approaches the rest of her life with similar intensity. Before the 2013 season she was named one of thirty candidates from around the country for the softball Senior CLASS (Celebrating Loyalty and Achievement for Staying in School) Award, which is given to a student athlete who excels in the community and the classroom as well as in character and competition.

“It is a really extraordinary award,” Flynn says. “It is more than just being the best at your sport. It is being successful in all areas of life. I think that is the thing I am most proud of Steph for.”

A neuroscience concentrator who would like to eventually attend medical school, Thompson was named to the 2012 Academic All-Ivy team.

And as if studying neuroscience and playing softball at a rarified level weren’t enough, she has somehow found the time and energy for a variety of volunteer activities that would tax someone far less busy. During her freshman year, for example, she helped the softball team raise $500 as part of the athletic department’s Dash for Diabetes, which benefited the Juvenile Diabetes Research Foundation. She has volunteered regularly in a third-grade classroom at the Vartan Gregorian Elementary School and worked as a volunteer research assistant at a local hospital.

Thompson participated in the Community Health Advocacy Program at the local YMCA, teaching preschoolers about health. She has also become an advocate for the homeless in Providence. Every Sunday during the fall, Thompson and a few teammates head down to a Providence soup kitchen to make sandwiches and distribute them to homeless men and women. In addition, she helped organize Brown’s Home Runs for the Homeless, a home run derby with the baseball team to help raise money for the soup kitchen.

A two-year captain, Thompson is the team’s leader. “People really listen to and respect all that she has to say,” Silverstein says. “Steph’s modesty is one of her best attributes, and it makes her an incredible teammate and leader. She has worked hard to achieve all that she has accomplished, and she deserves all of it, but you’ll never hear her talking about her awards and accolades.”

“She will be the first one to tell you,” says infielder Aly Caplan ’13, “that her accomplishments don’t matter if the team doesn’t win.”

Reader Responses to The Top One Percent