Doing What You Love

If you love sports, why not make a career of it? Well, for one thing, it’s harder than it looks. Not everyone can be a major league shortstop, and the competition for sports jobs is fierce.

For a few students the answer is to create your own job, the if-you-build-it-they-will-come approach. Judging from these three young entrepreneurs, it just might work. 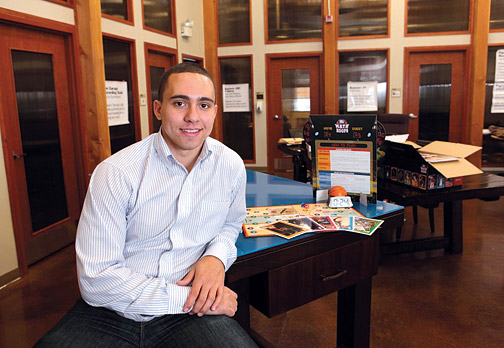 Growing up in Los Angeles, Khalil Fuller ’14 watched too many of his friends and classmates fall behind in math and then drop out of school. When he began tutoring students, he quickly realized that he needed to make math more fun and culturally relevant. So, he says, “what I started to do was bring basketball into the math a little bit. Instead of ‘Sally went to the store and bought x apples,’ it was ‘Kobe drives to the rim and takes x shots.’”

That’s where Fuller got the idea for his company, NBA Math Hoops. But it didn’t become a reality until he took a class with Alan Harlam, who is director of innovation and social entrepreneurship at the Swearer Center for Public Service. Through Harlam, Fuller met Bill Daugherty, a Providence investor who had worked at the NBA for almost a decade and was teaching entrepreneurship at a local alternative school. Daugherty introduced Fuller to Tim Scheidt, a veteran teacher and administrator. “He had been tinkering with this basketball math board game for over a decade, but it hadn’t really gone anywhere yet,” Fuller says.

Daughtery, Scheidt, and Fuller teamed up and brought the idea to the NBA. “They liked it and gave us a short-term royalty-free license,” Fuller continues. “They really bought into the social mission.”

The team then approached Rhode Island–based toymaker Hasbro, which made thirty prototypes. After students used it for six weeks, their math scores improved more than 50 percent.

That success led to more support from the NBA and Hasbro. The NBA expanded the royalty-free license and Hasbro granted NBA Math Hoops more than $100,000 in in-kind production to carry out a national pilot, testing it on 10,000 students in more than 350 schools.

Fuller, who is also a member of the men’s rugby team, continues to balance NBA Math Hoops with a rigorous academic schedule. The key for him is time management. He typically gets up at 4:30 or 5:00 a.m. and tries to stack all his classes together on a few days.

“There are sacrifices that you make,” he says, “but they aren’t really sacrifices if you are doing something that you love.”

Like many fathers, Andrew Pollis ’86 passed on to his son his love for his alma mater and his favorite baseball team, the Cleveland Indians. And it stuck. A Tribe fan since birth, Lewis Pollis ’14 followed his father to College Hill. Realizing at a young age that he did not have the stuff to succeed on the diamond, Pollis turned his passion for baseball into analytics and writing.

During his senior year of high school, he began blogging about the sport. “I finally found a place where I could get people to read my rants,” Pollis says. After writing for different websites for about two years, he had the opportunity to relaunch the Cleveland Indians fan site on the FanSided.com Sports Network.

“I liked the chance to have my own blog again, to build it up from scratch,” says Pollis. He picked the name Wahoo’s on First.

Pollis’s writing and analysis were honored by the Society for American Baseball Research with its Contemporary Baseball Commentary award for his article “Did Hall of Fame’s Founders Want Voters to Judge With Their Eyes?” which was published at the website Beyond the Box Score.

In May, he quit managing Wahoo’s on First to become a baseball analytics intern in the Cleveland Indians front office for the summer.
“This has been my dream job since I was four,” Pollis says.

Motivated by his passion for both sports and technology, Grant Gurtin ’12 came up with the idea of a company that would aggregate sports Twitter feeds—basically a social network for sports fans. A key component was that the content would be curated, so that the tweets would be from experts: beat writers, players, sportscasters, and other insiders. During his sophomore year, Gurtin realized his idea could become a reality after taking an entrepreneurship class with Danny Warshay ’87, a serial entrepreneur and adjunct lecturer in the School of Engineering who has inspired and mentored numerous Brown start-ups.

He set about building a staff. “It came down to picking the right team and finding the right people to work with,” Gurtin explains. For someone with technical skills, he found varsity water polo player Marcus Gartner ’12, a computer science concentrator who had interned for two summers at Amazon.

“When Grant approached me,” Gartner says, “it was a good fit because I could have some help in building something and I would have more ownership of it.” RISD student Sam Andrus came on board to handle the creative side.

Initially, Gartner conceived Fanium as a web aggregator of sports news and scores, but the competition proved rough. “There are a lot of players, and a lot of them are very powerful,” he says.

So Fanium shifted its focus to fantasy sports. It has released a free Canadian Football League (CFL) fantasy football mobile app, and plans to release a National Football League (NFL) version this summer. The CFL version is available for the iPhone, and Fanium plans to make the NFL version for both iPhone and Android platforms.

Gurtin and Gartner graduated last year, so they’re free to concentrate full-time on Fanium. Looking back, Gartner says the keys to getting the business successfully started were simple: diligence and hard work.

“I had a concrete idea of what I wanted to be doing, and I didn’t think about anything else,” he says.

Reader Responses to Doing What You Love