Many of the visitors to Manhattan’s Madison Square Park on a beautiful afternoon this May were taking photos of three newly installed, massive, and brightly colored sculptures made of hand-knotted and painted nautical rope. Among the photographers, unknown to the rest of the crowd, was Orly Genger ’01, the sculptor who created Red, Yellow and Blue. 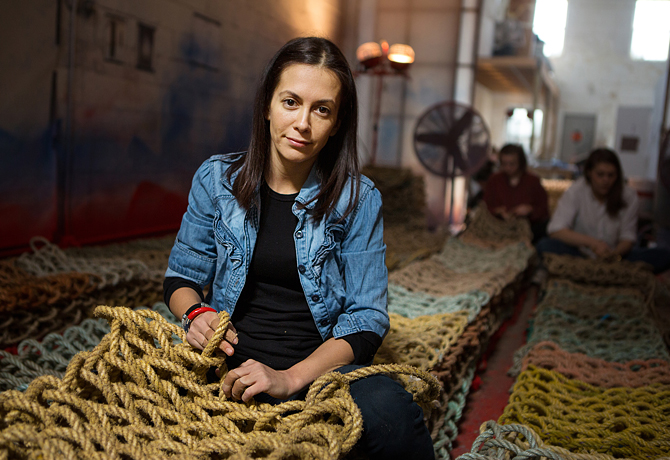 “It’s the first time I’m seeing people enjoy it, and this is very cool for me,” Genger said as she snapped pictures with her cell phone of a woman reclining in one of Yellow’s many curves. “This is really a pleasure. I made it for them.”

Genger is known for her large rope works (as well as some made of metal), which have been exhibited in such museums as New York City’s Whitney Museum of American Art and Museum of Modern Art, and San Francisco’s Museum of Modern Art. After she was commissioned several years ago to create the pieces for this summer’s installation, she says she “walked around the park and came up with the idea. One of the inspirations was to make spaces, rooms for people to stay in.”

The final installation, made up of three separate structures, seems literally to draw viewers in. Kids appeared to instinctively understand Genger’s intention as they raced around inside the smaller-scale Yellow, turning it into an urban playroom. Inside the high-walled Blue section, people sat quietly on the grass, reading, eating lunch, or napping in the spring sunshine. The enclosure felt like a formal garden fenced off by high hedges. “I’m told this has already turned into a make-out area for couples,” Genger said, laughing. In a section where several of the ropes trailed onto the ground, shoots of grass were already growing right into the sculpture. 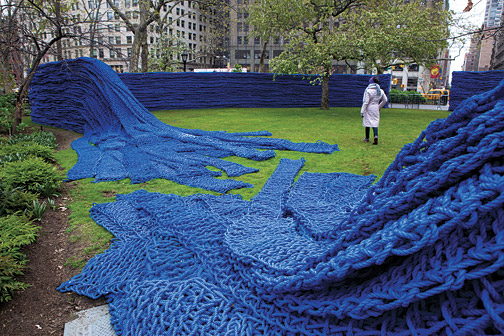 A visitor explores Blue, one of the outdoor rooms Genger created in Mantattan's Madison Square Park.

It took two-and-a-half years to complete the three installations, which are constructed from 1.4 million feet of rope originally used on lobster boats in Maine. The rope arrived at her Brooklyn studio “wet or frozen and with fish bones in it. It stunk and was very dirty,” Genger recalled with a shudder. After she and several assistants cleaned and dried the rope, the thick strands were primed on all sides, dried again, painted, and dried yet again (they required 3,500 gallons of paint). Then they were hand-crocheted into 100-foot-long strips. The artists didn’t wear gloves because they needed to feel the rope’s texture, and the work took a toll on their hands. “We were like boxers, with bandages on our knuckles and cuticles,” Genger said. “We’d knot all day and paint all night.”

Constructing the pieces in the park took eleven days, while Genger and her team stood on ladders layering the heavy strips onto tall pipes anchored onto metal footings. “It was like laying brick,” she said.

Genger grew up in Manhattan “always making art,” mostly drawings at first. At Brown she shifted to sculpture. “Brown was very nurturing,” she recalls. “It gave me space to play, experiment, and feel safe.” In addition to her metal and rope sculptures, she has also designed a line of jewelry made of—what else?—brightly colored knotted rope and metal.

Red, Yellow and Blue will be in New York City's Madison Square Park through September. In October it moves to the deCordova Sculpture Park and Museum, Lincoln, Massachusetts.

Reader Responses to Get Roped In