While working on her graduate at Brown, playwright Jackie Sibblies Drury ’10 MFA found something spooky about Rhode Island. She felt it walking through the usually empty Swan Point Cemetery, where horror writer H.P. Lovecraft is buried. Online, she found an 1890s newspaper article about an Exeter, Rhode Island, man who believed vampires were giving his family tuberculosis. To cure his son, the man dug up a grave, removed the corpse’s heart, and fed it to the boy. 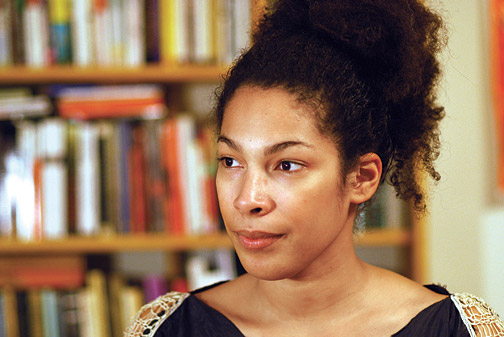 Jackie Sibblies Drury uses zombies to talk about race.
In the end, it was zombies, not vampires, that inspired Drury’s play Social Creatures. It tells the story of a gang of unruly, disputatious survivors trying to make it through a zombie apocalypse by hiding inside a theater. There’s blood, gore, and disembowelment, but the play, which premiered at Providence’s Trinity Repertory Company this spring, is really about how we see the unknown as monstrous. When an African American shows up at their hideout, the white characters decide he’s infected and imprison him.

“It’s about how we become scared of anything outside your own group, however you define it,” Drury says, and adds that, in America right now, “we’re divided and suspicious of each other. People are terrified of everyone that they don’t know.” The Providence Journal called the play “quirky, fresh, and super-smart, one of the best things Trinity has done this season.”

Social Creatures follows Drury’s first play, the prolixly titled We Are Proud to Present a Presentation About the Herero of Namibia, Formerly Known as Southwest Africa, from the German Sudwestafrika, Between the Years 1884–1915. In it, a group of actors rehearses for a play about a little-known genocide in Namibia. It becomes increasingly difficult for the characters—some black, others white—to speak openly and honestly about race. They wind up brawling over how to respectfully represent such a horror.

Drury says the idea for We Are Proud came out of a class she took at Brown on historiography. “The students who were white felt the immediate need to apologize for their privilege,” she says. “They looked to the ethnic people in the class as experts and felt they had nothing to add to the conversation.” There was something evasive, even untruthful, in the way her classmates talked about race, she says. “You get stuck so you’re not able to talk about your actual feelings.”

Drury grew up in Plainfield, New Jersey, where she was raised by her Jamaican immigrant mother and grandmother. Her mother was shocked to discover what a prominent role race still played in American life. She enrolled her daughter in a multiracial private school where students sometimes split themselves along race and class lines. Drury says the experience gave her insight into the persistence of “segregation even in a harmonious community.”

Drury’s mother, a businesswoman, moved rapidly up the corporate ladder despite her status as an outsider. Drury describes her as an “inspiring American success story.” When Drury became involved in theater as a Yale undergraduate, she says her mother “was terrified at first. She was like, ‘You’re going to this big fancy school and studying theater? What a waste.’” On the other hand, her mother was a big fan of plays and musicals so, Drury says, “My being a playwright is kind of her fault.”

Next year, Drury’s play about the Namibian genocide will be produced at five U.S. theaters, including Woolly Mammoth, in Washington, D.C. This summer she is attending the Sundance Institute Theatre Lab to work on a play about photography and legacy. And she has another piece in the works about YouTube. Right now, she says, she is fascinated by the role race plays in American life, but she plans to branch out.

“Race is involved in the way I go through the world,” she says, “but it’s only one aspect of what makes up a person.”

Reader Responses to The Monstrous Unknown