A Heretic and a Prophet

It’s not often that a specialist in Gnostic gospels and early Christianity draws a standing-room-only crowd to a Commencement forum. But Karen L. King ’84 PhD did just that, and she kept her audience rapt, too, in a talk that was plainspoken, erudite, and even funny. 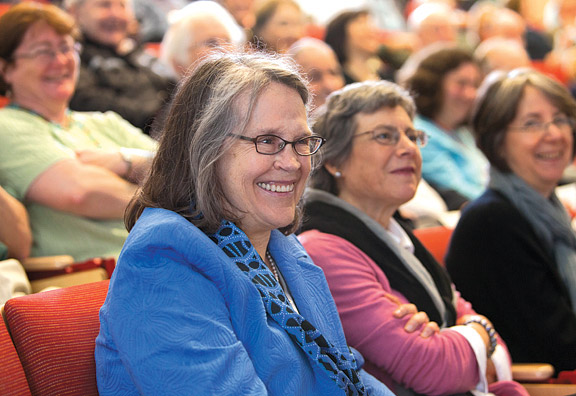 Scott Kingsley
Karen L. King '84 PhD, received the Graduate School's Horace Mann Medal.
King holds the nation’s oldest endowed professorship—the 1721 Hollis chair at Harvard Divinity School—and she was at Brown to accept the Graduate School’s Horace Mann Medal. She had achieved a more popular kind of celebrity last fall, though, with the announcement of a fragment of papyrus that read, in Coptic, “Jesus said to them, my wife…” Overnight, King became both heretic and prophet—the woman who said Jesus was married.

When the owner of the fragment first approached her in 2010, King said, “My first reaction was, ‘Really? Modern forgery—here we go again.’” She rolled her eyes. But the owner persisted, and a papyrologist concluded that the fragment might be authentic. They decided to announce their finding and “let academicians do what academicians do—debate!” she said.

King showed an image of the fragment on the screen behind her. “It’s really little—smaller than a credit card,” she said, translating the tiny writing.

“The fragment is not evidence of Jesus’s marital status,” King said. She speculates that it is, however, a late second-century translation of a dialogue in which Jesus talks to his followers about family, discipleship, and worthiness—what it means to live the Christian life. He mentions Mary. “Does it refer to Mary, his mother?” she asked, citing the Gospel of Philip, which mentions the three Marys “who always walked with the Lord”: Mary, his mother; Mary, the sister; and his beloved Mary Magdalene.

By the end of the talk, the audience was buzzing—not with answers so much as questions: why were early Christians so concerned about Jesus’s marital status. And more interesting: why are we so invested in it today?

Reader Responses to A Heretic and a Prophet