Warning! This little app is addictive. You fire it up to learn when Faunce House was built, and half an hour later you’re reading that Andrews House was the governor’s mansion before it housed health services. 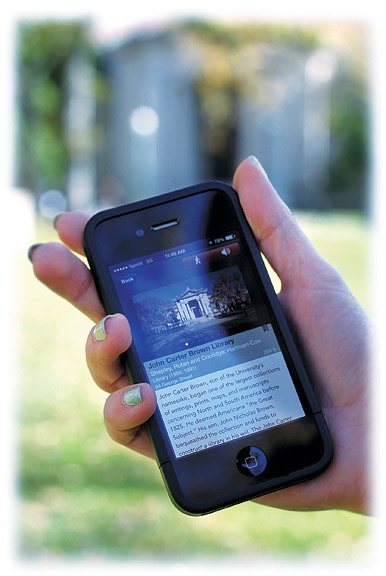 “I always wondered why it was so elegant,” marvels Siri Olson ’14, the editor-in-chief of the new app, Brown Facades. Olson took on the project in 2011, when she enrolled in a seminar with architectural historian Dietrich Neumann, who assigned students to write essays on campus buildings with the goal of creating an app. (He believes it’s one of a kind.)

Students scavenged libraries, archives, and the Rhode Island Historical Society for information and images. “We created a prototype Google site and ended up with more than 100 entries,” Olson says. Several students stayed on to help with the project, and, after the rest graduated, Olson filled in the gaps, pruning entries to a uniform, phone-friendly length.

Neumann did the final edits and hired photographer Hassan Bagheri to create the images. RISD professor Gokce Kinayoglu did the design work and shepherded the product to iTunes, where you can download it for free.

You can search the app by architect, historical period, location, and function. You can even look up what Neumann calls ghost buildings: those that either were torn down or were designed and never constructed.

Get Brown Facades for free at the App Store on your iPhone.