When it comes to New York City style, Manhattan dominates. Fashion-conscious Brooklynites have long had to cross the river to shop for the best clothes. Until now. Retailer Jen Mankins ’97 has reversed that trend with Bird, a trio of upscale boutiques that are luring Manhattanites out to capture the trendy “Brooklyn look.” 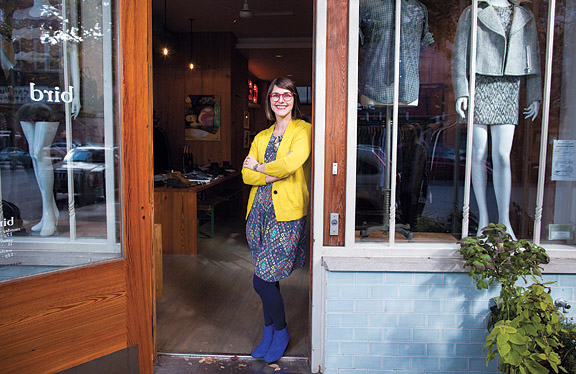 Michael Nagle/The New York Times/Redux
At Bird, her trio of Brooklyn boutiques, Jen Mankins '97 sells chic, wearable clothes. This, her newest and largest store, is in South Williamsburg.
Mankins bought her first store in Park Slope, around the corner from Prospect Park, in 2004, and stocked it with smart clothes that accommodate busy lifestyles—working mothers, for example, who wanted to look cool after the office while taking their kids around on their scooters.

Bird’s clothes were less precious, and perhaps edgier, than those sold in Manhattan. They were also more functional: stylish shoes with lower heels and dresses made of durable fabrics, with longer skirts and sleeves that could be rolled up.

And while Mankins carried name brands, she also sought out lesser-known designers and scouted new talent. Her support has proven invaluable to such small  independent designers as the Brooklyn-based Project Runway winner Gretchen Jones. Mankins has championed now-established brands such as Rachel Comey, whose collection occupies a prominent space at Bird. The shop’s prices are high, but in line with those of other designer stores: pants range from $200 to $890.

Over the past decade Bird has grown into a mini empire. The largest of the three boutiques, which opened in 2009, is housed in a sprawling former warehouse in the South Williamsburg neighborhood. It also functions as a gallery and performance space, where Mankins exhibits works by local artists and by friends from Brown and RISD. On weekends it teems with shoppers from all over New York City. Last summer, many came specifically for one of the season’s hard-to-find items, Warby Parker sunglasses. (The company, cofounded by Andrew Hunt ’04, provides funding and eyeglasses to nonprofit partners who supply eyeglasses to people around the world unable to afford them.)

Mankins, who grew up in Texarkana, Texas, credits Brown with encouraging her to explore passions beyond her biology major, especially African dance. For her, she says, “school was not just about going to class, or about homework. It was about thinking, How do you think about everything, not just about a math problem? These are conceptual things we are dealing with, the bigger picture.” Mankins sees fashion as a part of that big picture.

After graduation, Mankins moved to Austin, Texas, to spend a summer with her sister and brother-in-law and to study for the medical school admissions test. “I got a job at my favorite store, By George.” Mankins says. There she had an epiphany. “I loved the environment, the clothes, and I was a great salesperson. I was very curious about the designers. And I thought: ‘This is what I am going to do.’”
With her parents’ support, Mankins moved to New York City. After a stint as an assistant buyer at Barneys, she joined the designer Steven Alan and his chain of boutiques as head buyer. She tried designing her own clothing line but returned to retail instead, buying Bird and making it her own.

Last December the New York Times hailed Mankins as a trendsetter, dubbing her “The Curator of the Brooklyn Look.” Her thriving website (www.shopbird.com ) also features a blog and information about art shows and other cultural events. And she has added a small menswear collection to the South Williamsburg store. “Fashion is always evolving and changing,” she says, “and there are always new opportunities to explore.”