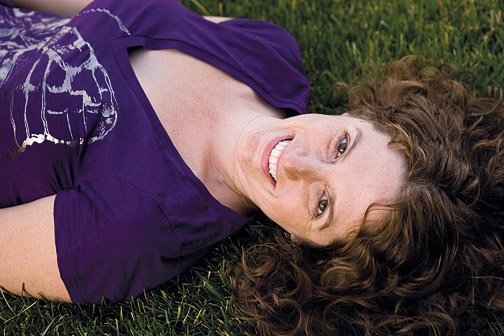 Kristen Renee
Lila Rose Kaplan's musical tells the story of a princess who finds love through gravity.
“As a playwright,” Lila Rose Kaplan ’02 says, “I get to be Emily Dickinson writing alone in the attic in the morning and then come downstairs and create with other people in the afternoon.”

Kaplan’s upcoming production, The Light Princess, which will be staged just in time for Christmas as the American Repertory Theatre in Cambridge, Massachusetts, is a whimsical musical based on her favorite childhood fairy tale about a princess at her christening who is cursed to an existence without gravity. The king and queen must find the princess’s gravity before her sixteenth birthday or their kingdom will fall into the hands of the witch who cast the evil spell.

Scottish author George MacDonald, a mentor to Lewis Carroll and other Victorian writers, wrote the original Light Princess, and Maurice Sendak illustrated the novella, which remains one of Kaplan’s favorite books. At the outset of the story, when the princess has no gravity, she is free from sorrow and suffering, but she is also free from love. Only when she saves her prince from death and discovers love does she find her gravity. “How marvelous—a funny, romantic, and moving fairy tale about a young woman who learns to connect to the ground and be strong and passionate! What more can you ask?” Kaplan says.

Now a playwriting fellow at Boston’s Huntington Theatre, Kaplan earned her MFA in playwriting at UC San Diego, but she credits former Brown professor Paula Vogel and then-graduate student Sarah Ruhl ’97, ’01 MFA, with believing in her voice and giving her the courage to pursue her passion.

Kaplan says she was introduced to the theater through Broadway musicals—A Chorus Line, City of Angels, and Guys and Dolls. “I grew up in the suburbs,” she says, “and there was nothing I loved more than going to the city and seeing a world burst to life onstage full of song, dance, and story.” She wrote her first play at the end of high school. The summer after the 2009 off-Broadway debut of her play Wildflower, Kaplan had an epiphany: “How I missed musicals! It was time to write one.”

Kaplan approached composer Mike Pettry, the husband of her friend Claire Karpen Pettry ‘04, with her idea for a musical Light Princess.

Kaplan felt that Pettry’s music—a mix of honesty and silliness, capturing both the fantastical and the everyday aspects of life—would complement her own bittersweet voice exploring the mysteries of human relationships. “Mike and I used MacDonald’s vision as an inspiration for our musical adaptation,” she says. “We like to say that our show is for young people and for people who remember being young.”

Reader Responses to Falling into Love