In 2007, pediatricians at New York City’s Mount Sinai Medical Center pricked the heel of newborn Jackson Silver during a routine testing for gestational diabetes. They expected the baby to be healthy. But when they put a Band-Aid on, the adhesive ripped off the skin on his foot. Then blisters began appearing all over Jackson’s body. Jackson, it turned out, had Epidermolysis Bullosa (EB), a rare genetic disorder that causes hemorrhaging and severe blistering of the skin. “We had no idea we were carriers,” Jackson’s father, Alexander Silver ’99, says. 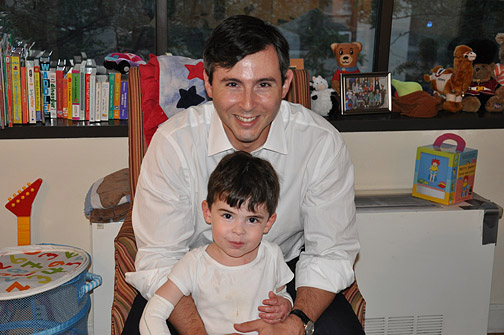 In 2010, Alexander Silver and his wife established the Jackson Gabriel Silver Foundation, which is dedicated to stopping EB, a disease that afflicts an estimated one in 50,000 newborns. Care can be extraordinarily expensive. Jackson’s bandages, for example, cost up to $12,000 a month, and his total medical bills can be more than $100,000 a year. The Silver Foundation has raised more than $1.7 million for medical research into potential cures, and it spreads awareness about EB using Jackson’s story. “An early lesson in philanthropy,” the boy’s father says, “was that people responded when we personalized the disease.”

Alexander Silver concentrated in political science at Brown, but a post-graduation internship led to a career in finance. He spent two years at an investment firm, went to Harvard Business School, and then became a partner at his own company in New York City, P2 Capital, just a few months before Jackson’s diagnosis. Two years later, Silver hosted his first EB fund-raiser at an exclusive Manhattan club, calling the event “Action for Jackson.” It raised almost $100,000.

In 2010, Silver testified before a U.S. Senate committee on behalf of parents of children with rare diseases. The National Institutes of Health classifies EB as a rare or “orphan” disease, which means it afflicts fewer than 200,000 Americans and doesn’t attract significant funding. “If you think about them [people with rare diseases] as a block of people, it’s almost 10 percent of Americans—10 percent! That’s a huge block of Americans to be affected by something,” Silver says.

One of the foundation’s earliest partners was David Woodley, a dermatologist at the University of Southern California who has pioneered research on the replacement of Collagen VII—the skin-binding protein that fuses the outer layers of the skin. By using intravenous protein-replacement therapy, which Woodley’s team has tested on mice, researchers may have found a fix for the protein deficiency that results in severe forms of EB. Silver hopes that a Phase I clinical trial on humans could begin within the next few years, especially now that Woodley’s research is backed by a major pharmaceutical company.

The Silver Foundation also donated $450,000 to researchers at the University of Minnesota who are developing what Silver calls “the Holy Grail”—an EB treatment involving the modification of stem cells. “The money entrusted to us is making a difference as we speak,” Silver says.

Reader Responses to Personalizing the Cause