At Brown, Michael Rubinger ’67 majored in international relations. He pictured himself working overseas in the developing world, but soon realized he could tackle essentially the same problems in America’s blighted cities. In the late 1970s, he worked as assistant commissioner for the Department of Employment under New York City Mayor Ed Koch, but he left that job in 1979 to join a new nonprofit economic development organization called the Local Initiatives Support Corporation (LISC). 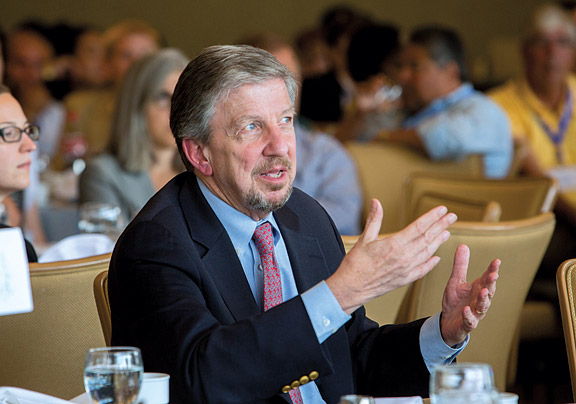 The group, whose aim is to revitalize low-income neighborhoods across the country, pioneered a new approach to community development by using the private sector to complement government aid for economic growth. “The idea of revitalizing inner cities with private capital was kind of a revolutionary idea,” Rubinger recalls. “It’s not today, but in 1980 banks had redlined communities. It almost seemed like an unachievable notion.”

Rubinger has been LISC’s president since 1999. The corporation, which now has offices in thirty cities, spent $1 billion last year on development, with private companies, nonprofits, and government agencies chipping in another $2.8 billion. The result was more than 11,000 affordable homes and apartments and the addition of 3.7 million square feet of retail and community space in cities across the country. LISC has also started schools, child-care facilities, and health clinics; built playing fields; and dispensed loans to businesses. The goal is to transform urban areas of decay and neglect into neighborhoods where people want to live and work. “If you do housing, it’s not enough,” Rubinger says. “If you do jobs, it’s not enough. You have to deal with all the things that make up a desirable neighborhood, and you kind of have to do all of them at once.”

The Providence neighborhood of Olneyville, just a few miles west of Brown’s campus, is a textbook example of the inner-city redevelopment that Rubinger strives for. The area once boomed with busy industrial mills, but it languished for decades before LISC arrived on the scene ten years ago. Teaming up with a local nonprofit housing corporation, LISC built more than 200 homes and apartments in Olneyville, sharply cutting the number of garbage-strewn lots and abandoned buildings. The neighborhood’s only free health clinic moved into a mill redeveloped by LISC, giving it the ability to treat 2,000 patients a year, or about five times more than their outdated, smaller site.

To boost employment, LISC poured funds into another idle factory, where industrial and commercial businesses give hiring preferences to residents. “It may not have turned into a wealthy suburban neighborhood, but we’re making a difference,” Rubinger says. “It’s a low-income community, but it’s a nice low-income community. It’s coming up.”

Still, Rubinger says, the LISC approach is not without risks. “The results are never guaranteed,” he says. “These are difficult markets. The investments we make tend to be risky and difficult.”

And often successful. “What we’ve demonstrated,” Rubinger says, “is that you can go into these difficult neighborhoods and invest and have successful financial returns while doing something important.”