A Part of This Country

For most of us, a trip to Washington, D.C., is no big deal. To Dorothy Crews Herzberg’s low-income high school students, it was nothing short of remarkable. “None of them had ever been on a plane before,” Herzberg ’57 says. “They all asked me if they needed passports. They weren’t sure if it was in the country.” One girl said, “I didn’t know Washington was for poor people.” 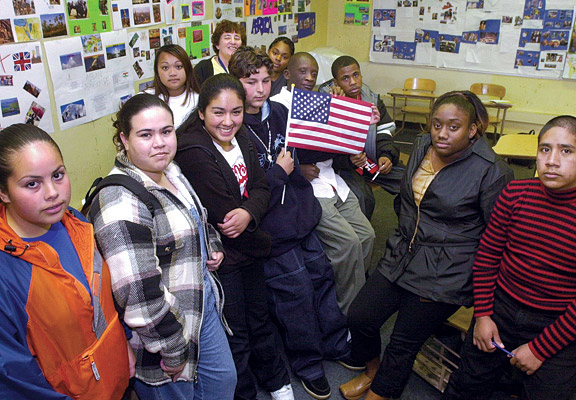 Herman Bustamante Jr./Costa County Times
Herzberg, in far back, with the first class of students she took to Washington, D.C.
Between 2002 and 2012, Herzberg ferried some 200 students and twenty-two teachers there from Richmond High School, a low-income school in Oakland, California, for a week of learning about the workings of government. They visited the House and Senate galleries, observed debates and committee meetings, visited the Congressman from their district, and participated in a mock Congress. The activities were organized by the Close Up Foundation, a D.C.-based nonprofit focused on building citizenship in kids.

“I’ve always felt, out here in California, that Washington is on another planet. It feels so far away and remote,” Herzberg says. In particular, for students who were just learning English or whose families were new to this country, she says, “I felt they needed to go to Washington to understand that they were part of this country.”

Herzberg discovered teaching later in life, joining the faculty at Richmond High in her fifties. She had studied history at Brown and taught in Nigeria as a Peace Corps volunteer in the 1960s, but then spent two decades raising her children, going to law school at night, and working at law-related jobs. She taught English as a Second Language and had been at Richmond High for only two years when she realized how narrow the experience of her students was. “I was very frustrated,” she says, “that the students didn’t know any world outside my high school. They weren’t part of the larger community.”

When Herzberg began planning the first trip to D.C., the principal told her to stop. “She said I was promising something I couldn’t deliver,” Herzberg says. “I was standing in the Xerox room one morning, and a teacher turned to me and said, ‘This is a ghetto school. These kids can’t go to Washington.’”

Despite the naysayers, she estimates that she raised close to $300,000 during the decade when she made the trips by getting scholarships from the Close Up Foundation and contributions from local organizations. Her students also held car washes, bake sales, and spaghetti dinners.

Herzberg retired from teaching in 2005, but continued to lead the trips until last year, when the economy finally made fund-raising too difficult. She says she’ll always remember the expressions on her students’ faces when they first saw the Capitol.

“The last trip, Obama was president,” she says, “and a couple of my kids were absolutely ecstatic that they were looking up at the place where his inauguration had taken place.”

Reader Responses to A Part of This Country