CEOs these days are only as good as their strategic plans. As much as students loved former president Ruth Simmons, the first African American to lead an Ivy League university, and as much as they basked in her obvious eloquence and charisma, her success at Brown was more than anything the result of the vision behind the Plan for Academic Enrichment and Simmons’s savvy knack for persuading donors to embrace it to the tune of $1.6 billion. 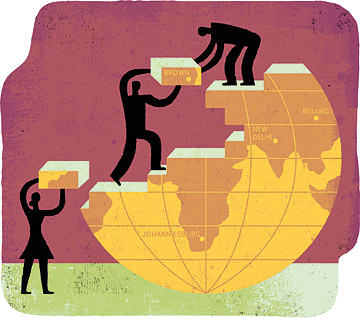 Since arriving at Brown a year and a half ago, President Christina Paxson has been mulling over how best to build upon the success of the Simmons plan. She formed no fewer than six planning committees made up of more than seventy students, faculty, and staff members and set up a working group to gather proposals for far-reaching academic initiatives that would set the tone for Brown’s future. From this and other input, Paxson wrote “Building on Distinction: A New Plan for Brown,” which the trustees and fellows of the Corporation overwhelmingly approved at their October meeting.

The plan attempts to identify what is most distinctive about Brown’s approach to teaching and scholarship—its competitive advantage—and to create mechanisms that will allow it to thrive.

“The beauty of this plan,” Chancellor Thomas J. Tisch said in a statement after the Corporation meeting, “is that it reflects the University’s core values of openness, creativity, and collaboration.”

Citing the importance of “integrative research,”which describes the growing academic trend of attacking complex scientific, social, and academic problems by assimilating work from a number of disciplines to create solutions free of the limitations of an individual discipline’s approach, the Paxson plan identifies seven “themes” that are particularly suited to this strategy: “cultivating creative expression,” “understanding the human brain,” “sustaining life on earth,” “creating peaceful, just and prosperous societies,” “exploring human experience,” “using science and technology to improve lives,” and “deciphering disease and improving population health.”

These areas of focus highlight the campus schools, programs, and institutes that already are strong but that require additional faculty, space, or other resources to take their work to the next level of excellence. The Watson Institute, for example, is an obvious place to examine how best to create peaceful, just and prosperous societies, while both the medical school and the new school of public health are matches for deciphering disease and improving public health.

“Building on Distinction” also explores ways to enhance Brown’s open undergraduate curriculum through greater use of technology, deepening fluency in science and data analysis, and more opportunities for students to get real-world experience with societal and international problems.

This real-world experience will come from more off-campus internships and research opportunities, even if they require tweaking the academic schedule to create more time away from campus. Envisioning a “virtual campus,” the Paxson plan recognizes that in today’s plugged-in world, students can be close to campus even when they are half a world away.

Higher education, “Building on Distinction” states, “is in the early stages of a grand experiment in the creative application of online and other digital technologies.… Our plan calls for aggressive experimentation in new modes of education, testing new ideas, assessing their efficacy, and adapting them as necessary.” It calls for establishing a “Laboratory for Educational Innovation” housed at the Sheridan Center for Teaching and Learning to lead the experimentation.

Having learned from the effect of the 2008 financial downturn on the Plan for Academic Enrichment, Paxson is reluctant to promise expanding need-blind admission beyond its current commitment to students from the United States. “Building on Distinction” promises to maintain that commitment and to offer financial aid for U.S. middle-class students while resolving to “work toward” becoming fully need-blind for all. Paxson also vows to expand access to the University by searching for deserving applicants from underrepresented backgrounds, “including those who are first in their families to attend college, as well as veterans and children from military families.”
The strategic plan recognizes that becoming bigger and better requires more space in which to grow. “Building on Distinction” calls for “continued modest growth in the numbers of undergraduate, graduate students, and faculty.” It envisions greater expansion into Providence’s jewelry district, home of the Alpert Medical School, and a transportation plan to support it.

Acknowledging the importance of faculty to a university’s reputation, “Building on Distinction” addresses the need for professors to free up time for research. The plan creates more support for sabbaticals and a class schedule that provides more time for faculty research.

It is of course far too early to assess the impact “Building on Distinction” will have on Brown. Now that the Corporation has signed off on it, the next step for Paxson will be to launch a fund-raising campaign to finance it; the ambition of any strategic plan, at a university, after all, depends on the financial support alumni give it. Although the University is quietly preparing for such a campaign, it is unlikely to begin during the celebrations that will be the focus this year during Brown’s 250th anniversary. After that, it will be game on.

Reader Responses to On the Map