Before venture capitalist Andy Hunt ’04 founded the eyewear company Warby Parker, he was a compulsive loser of glasses. “When I first moved to New York after Brown, I was constantly breaking them, losing them, or letting my scrip expire,” he laughed one evening this winter. “It got to be quite expensive.” 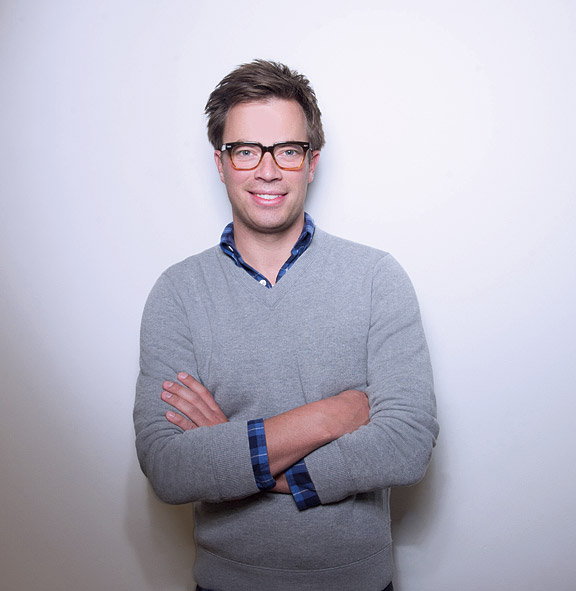 To see Hunt now, it’s hard to picture him in taped-together specs. Sitting among other tech founders in the members-only Soho Club in Manhattan’s Meatpacking District, he sports an out-of-season tan, a tailored Oxford, and no glasses at all.

A lot can happen in a decade. In 2004, Hunt was working his first job at an investment bank and planning backpacking trips to Cambodia. But in his spare time he was reading up on the eyewear industry, motivated by his aggravation with glasses. That research led to Warby Parker.

Launched in 2010, the company manufactures stylish glasses and sells them online at a fraction of the cost elsewhere. Warby Parker has since grown from four to 250 employees and is valued at about $500 million, with investors who most recently include J.Crew CEO Millard S. Drexler, who made the Gap cool in the 1990s. While Warby Parker still produces only a fraction of the glasses that are sold each year in the United States, its success has become iconic. People enthuse about would-be “Warby Parkers” manufacturing everything from mattresses to socks to perfume.

If the idea for Warby Parker was born of frustration (Hunt had Lasik surgery in 2008), its business model evolved at Penn’s Wharton School, where Hunt teamed up with fellow students Jeffrey Raider, Dave Gilboa, and Neil Blumenthal. Blumenthal had previously worked at VisionSpring, a nonprofit that distributes low-cost eyewear in India. Together, the group hatched a plan to take on Luxottica, the conglomerate that owns 80 percent of the world’s eyewear brands and controls their manufacturing and distribution. The students “pooled their collective piggy banks” and “basically didn’t sleep for two and a half years,” Hunt says.

At Luxottica-owned Pearle Vision or Lens Crafters, a pair of glasses runs about $300, but Warby Parker specs cost a flat $95 (they don’t make bifocals or custom-fit you). Styles you select online are shipped free in packs of five for you to try on. For each pair sold, the company donates one to someone in need through VisionSpring.

Image has been key to the company’s success. Named after Jack Kerouac characters Warby and Parker, the company has a blog featuring interviews with beautiful glasses-wearers. The staff skews young and stylish. “We were all hipsters a little bit, so that was very much a part of the DNA of the company,” Hunt says. He considers Warby Parker’s success to be more than just a shock to a sleepy industry. “Young people care about brands they’re associated with and want more authentic, thoughtful products,” he says.

In 2011 Hunt left Warby Parker (he’s still on the board) to join the venture firm Highland Capital. Investing in companies was always his dream, he says. His newest project, Oyster Books—an e-books subscription service—appeals to the same demographic as Warby Parker. So does Harry’s, a shaving company Warby Parker cofounder Jeffrey Raider is building with Highland’s help. “My job is literally to go out and meet the young, cool, rebellious people who are changing the world,” Hunt says. “It’s a lot of fun.”

Reader Responses to The Disruptor