On October 7, 1927, while driving back from a Princeton game, the Brown Band took a detour. Formed just three years earlier, the band was led by Irving Harris ’28, who had borrowed some old drums the navy had stored on campus after World War I. 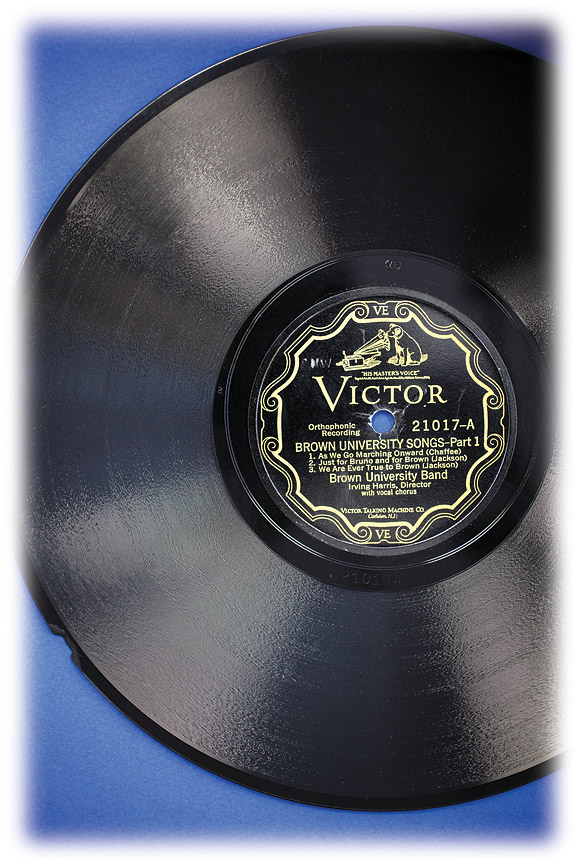 The young musicians must have been ecstatic when they stopped in Camden, New Jersey, at a church-turned-studio where Fats Waller had recorded music while playing the studio’s organ. There, the Brunonians cut an album with the Victor Talking Machine Company, then the world’s largest producer of phonographs (think Victrola). The band was in fine form; its ebullient performance still sounds fresh today.

Released in 1928, the 78 rpm record was reissued in the 1940s, according to Raymond F. Lynch ’42, who sent the copy at right to Wind Symphony conductor Matthew McGarrell. In a letter, Lynch explained that during his sophomore year his father—a distributor for RCA, which had purchased Victor—had ordered a special pressing of 250 copies of the old Brown record. They were sold exclusively at the music shop on the corner of Thayer and Angell streets.

“Assuming that it arrives safely,” Lynch wrote, “you should find it in mint condition, since it was never played very frequently.”