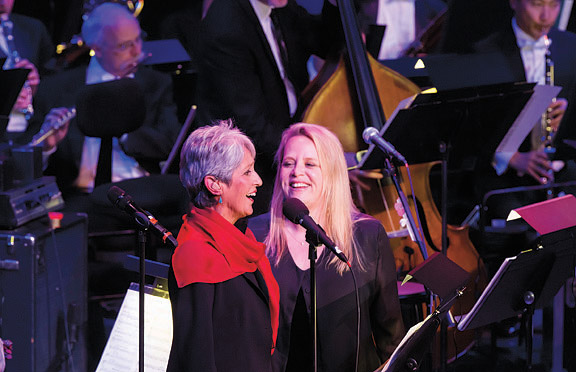 Undaunted by frigid New York City weather, fans of Mary Chapin Carpenter ’81 trekked to Lincoln Center’s Avery Fisher Hall to hear the singer and what she described as her “oldest and most necessary friends” perform with the New York Philharmonic on February 28 and March 1. Those necessary friends included Shawn Colvin, Tift Merritt, and Joan Baez.

“It’s beyond thrilling to be here on this stage singing with the great New York Philharmonic,” Carpenter said, to cheers from the opening-night audience, which one fan described as “a convention of retired hippies.” Carpenter sang more than a dozen of her classic songs, including “He Thinks He’ll Keep Her” and “Come On Come On,” most of which have been rearranged and recorded with symphonic orchestration on her latest CD, Songs from the Movie. A New York Times reviewer described the concert as having an “orchestral ethereality.”

The five-time Grammy Award–winning songwriter and performer has sold more than 13 million albums in a career that has spanned more than twenty-five years and that has erased the distinctions between country, folk, pop, and rock. In a video about her new CD, Carpenter says she has long been interested in reimagining some of her work with symphonic accompaniment, but the project became a reality only four years ago.

She chose the title Songs from the Movie because “a cinematic treatment of songs is what I wanted to try to go for.” And she  chose composer Vince Mendoza, who has worked with Sting, Elvis Costello, and Diana Krall, to arrange her songs for an orchestra. “His work is so distinctive, it’s so emotional, it’s so evocative,” Carpenter says in the video interview.

They recorded the CD in London with a full orchestra and choir at the historic AIR studios. “The very first day, when I stepped into the control room at AIR and Vince started conducting the first song, and it came through the speakers, it was the most extraordinary thing,” she recalls. “It was a physical sensation of being pushed back by the sound coming through the speakers.” Though she wrote the songs at different points in her career, the rearranged versions have the unified sound of a movie score.

In the video about Songs from the Movie, Mendoza, who conducted the New York Philharmonic concerts, describes that first day of recording: “The honesty of the lyrics really opens up entire emotional worlds, and to have Mary Chapin Carpenter with us with the orchestra, of course, brings the quality of the performance for the orchestra up many notches,” he says. “Really hearing her deliver the lyric for the first time with the live orchestra you go, ‘Oh, yeah—this is right.’”

This spring and summer, Carpenter will perform with major orchestras in the United States and abroad, accompanied by her “necessary friends”—the Indigo Girls and Baez, whom Carpenter described in New York as “an inspiration to anyone who ever picked up a guitar and wanted to sing.”