This year, Brown celebrates not one anniversary but two. Exactly 125 years ago this May, the University awarded its first two doctoral degrees—one to Austen K. DeBlois, in philosophy and psychology, and another to George Grafton Wilson, in history and political science. Although the Graduate School did not formally start until 1927, PhD students have been a vital part of Brown for over half of its existence. 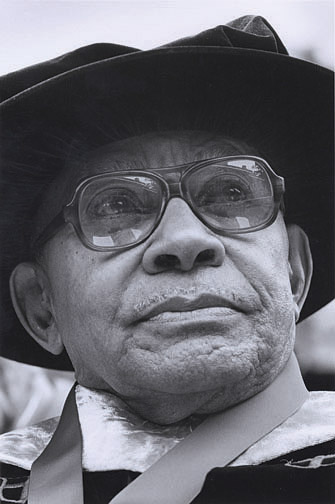 Currently, we have 1,379 PhD students spread across 48 programs. These students come from a wide range of undergraduate institutions in the United States and around the world. While at Brown, they take courses, train in laboratories, conduct research in libraries and at archaeological digs, and are involved in large-scale scientific research projects. Jennifer Ribeiro, for example, studies proteins called TAFs, which may play a role in the progression of ovarian cancer . Julia Troche is using virtual reality software to enhance educational curricula in history, archaeology, and religion. Olga Ohrimenko, who recently defended her dissertation, and other computer scientists here have developed an algorithm to secure cloud data.

Recruiting and cultivating outstanding doctoral students will continue to be an essential element of Brown’s growth. Our mission—of serving the community, the nation, and the world through education and scholarship—demands that we prepare the next generation of scholars to expand the boundaries of knowledge. A look at the careers of only a few of our graduate school alumni demonstrates the contributions Brown PhDs have made to the world. Samuel Nabrit ’32 PhD, the first African American to be awarded a doctoral degree from Brown, was an ambassador to Niger, served on the U.S. Atomic Energy Commission, and was a founding member of the Institute of Medicine. Lynn Pasquarella, who received her PhD in philosophy in 1985, is currently the president of Mt. Holyoke College. Maria Zuber ’86 PhD, currently the vice president for research at MIT, has worked with NASA to map the moon, Mars, and Mercury. We can all be proud of their successes and the accomplishments of our many other graduate alumni.

Even before they launch their careers, doctoral students are a vital part of our community. The ethos of Brown—with its focus on independent learning among undergraduates—influences the way our doctoral students tackle their education. The Open Graduate Education pilot program, recently touted in the Chronicle of Higher Education, takes its cue from the Open Curriculum, allowing PhD students to pursue master’s studies in a second discipline. More broadly, though, I hear how excited doctoral students are to become excellent teachers and mentors. Like our faculty, they derive a great deal of satisfaction from interaction with Brown undergraduates.

Talented doctoral students are drawn to Brown because of the strength of the faculty and the quality of the University. However, the market for such students is fiercely competitive, and fellowship support is also important. This spring, we are conducting a pilot program to provide Presidential Fellowships—which carry larger stipends—to our most talented applicants. As I write, the recruiting season is still under way. I hope this program will further increase the strength of doctoral education at Brown.