Dressed in jeans and a simple blouse, singer-songwriter Jocie Adams ’08 sat backstage on a thrift-store couch sipping a cola as her new band, Arc Iris, prepared to rock the house at a Los Angeles music club. The petite singer, songwriter, and multi-instrumentalist—who cofounded the rootsy band The Low Anthem with Ben Knox Miller ’06 and Jeff Prystowsky ’06 before starting her own group—confessed, “Live performing did not come naturally to me. When I started out, I used to have a puke bucket on the side of the stage … but not anymore!” 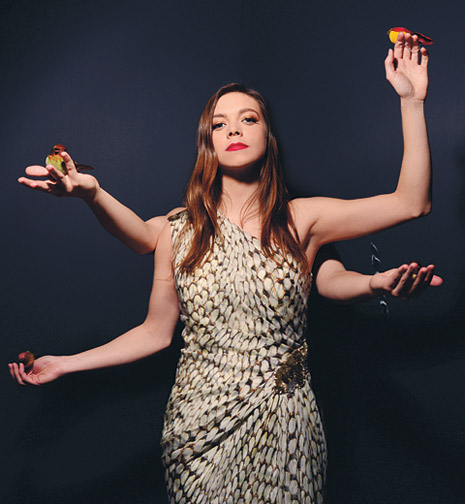 Shervin Lainez
Jocie Adams ’08
A half hour later, Adams proved the point when she strolled onstage in sparkly body suit and glitter-trimmed eyebrows. She sat down at an electric piano and led keyboardist Zach Tenorio-Miller ’07, cellist Robin Ryczek, and drummer Ray Belli through a brawny batch of songs lit up by her luminous vocals. Drawn from Arc Iris’s self-titled debut album, the bandleader’s arrangements incorporated a dizzying range of idioms pulled from orchestral pop, jaunty cabaret, 1970s-era folk, Beatles-flavored rock, and fusion jazz.

On the first single, “Singing So Sweetly,” for example, Adams deployed a catchy instrumental hook and her own teasing lead vocal against tinkling honky-tonk piano and a stomping Dixieland groove, interrupted periodically by lush a cappella harmonies from Tenorio-Miller and Ryczek. For “Canadian Cowboy,” Adams evoked shades of Joni Mitchell as she crooned the wistful ballad from behind the keyboard.

Adams stepped away from the piano periodically to showcase her skills on trumpet, guitar, and clarinet. But it was her voice that unified the tricky time signatures, the Appalachian-tinged melodies, the splashes of dissonance, the brooding cello lines, and the assorted stylistic mash-ups. Blessed with pitch-perfect intonation, soaring range, buttery vibrato, and an affecting catch in her throat to underscore more vulnerable moments, Adams, the singer, weaves a beguiling musical narrative that’s as warm as it is witty.

Adams’s new role as frontwoman took shape quickly after her departure from The Low Anthem last summer for a brief stint working at NASA. But the evolution of her intricate songcraft dates to her first year at Brown, where she enrolled in her first composition class. A classically trained clarinetist in childhood, Adams recalled, “When I got to Brown, my clarinet teacher wasn’t there, so I had to find something else that was equally good. And that was looking inside—instead of outside.”

Adams started writing songs while on tour with The Low Anthem, and in 2011 she began performing some of them with cellist Ryczek. “Robin lives in Afghanistan, so when she came home we’d go out and play some shows,” Adams says. “Then the songs would sort of brew, and when Robin came back again we’d find new treats in them. Then we got all the guys together, and a lot of the songs took on some new life.” Club-goers at LA’s Bootleg Theater agreed, endorsing Arc Iris’s intense stage show with heartfelt ovations. Following the band’s North American tour, which included a stopover at the SXSW festival in Austin, Texas, Arc Iris has booked May dates in Europe.

Adams jokes that her audience has changed radically of late. “When I was in high school,” she laughs, “I’d sit at the piano and sing songs to my cat and stuff like that.”

Reader Responses to Looking Inside