It’s been a few years since the African Sun stopped publishing, leaving campus without an important forum for issues affecting the black community. “It kind of just faded away due to lack of interest,”  Maya Finoh ’17 says. 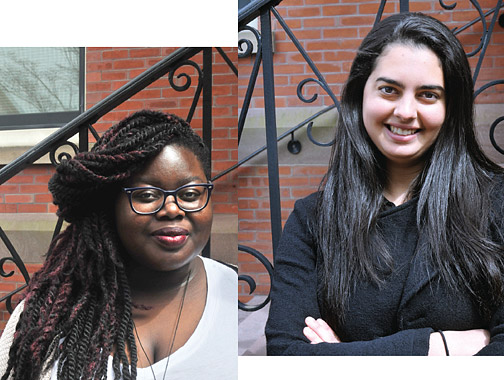 Last winter Finoh, Paige Morris ’16, and Jasmin Jones ’17 started OBSIDIAN, intended to be a successor to the African Sun. OBSIDIAN describes itself as “a literary and visual space to showcase the creativity and experiences of Black people.” It describes its target audience as “anybody who identifies with black american/afro-latino/afro-caribbean/continental african culture.” It debuted in February as a blog on the website tumblr featuring poetry, photos, art, an essay on actor Jesse Williams from the TV show Grey’s Anatomy, and a literary analysis of Zora Neale Hurston’s Their Eyes Were Watching God.

In the poem “Being Black” about an unnamed black woman, Kristin Ramcharan ’17 writes:

Somehow, she feels good
but what she’s not feeling
is this primarily white private institution.
‘Cuz in every room she steps in she’s an exception,
and she don’t end her sentence in an upward inflection.
She looks up, she got jokes comin’
because she sways different and she talks rugged.

The article on actor Jesse Williams by Justice Gaines ’16 assesses his emergence as a super-hunk. “It feeds into the exotification and fetishization of multi- and biracial peoples,” Gaines writes. “Would Jesse Williams still be considered so beautiful if he were darker skinned or even if he wasn’t multiracial and was just white?”

A second online student publication that began this year is Vagabond Magazine, which focuses on student travel. Its articles range from a travel essay on Istanbul to a piece on eateries in Cuba.

Eugenia Lulo ’16, a cofounder, says that she and two fellow international students felt “there was not really an outlet for stories on what students are doing around the world.” She says her appreciation of travel came while growing up in the Dominican Republic at a resort where her parents worked and wealthy Americans came to frolic. A lot of people never leave the resort and do not get to know the country at all, she says.

In Vagabond, Jonathan Nicholas ’15 describes the summer he spent couch surfing in Europe—using the website couchsurfing.org to find people willing to let him crash in their homes for free. He hopscotched from Italy to Brussels to Oslo this way.

“My aimless journey from Venice to Brussels landed me at a nudist’s apartment,” Nicholas says in a published interview. “If you approach it with an open mind, some incredible people come out of the woodwork. For me, the mantra is that there is no ‘one right way’ for people to live.”