It was not your everyday Baccalaureate speech. But then this year’s speaker, Nalini Nadkarni ’76, spends little time in the ordinary. A forest ecologist, she specializes in the canopy—“the space between earth and sky.” 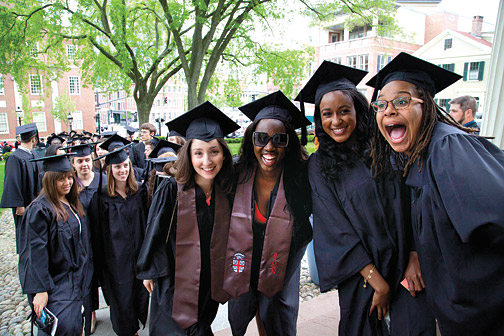 Mike Cohea
The excitement is just too much for this group of seniors to contain.

She addressed the class of 2014 in the First Baptist Meeting House, another space that symbolically connects earth and sky, in a ceremony that celebrated many faiths. Nadkarni described her own “wildly mixed up” background with an Indian father and Jewish mother. “We had Ganesha next to the menorah and Christmas ornaments,” she said.

Nadkarni said she found her calling on her first trip to Costa Rica, where she mastered rope-climbing techniques and was enthralled by the myriad birds, monkeys, and orchids living high in the treetops. She found her entomologist husband in the canopy, too, she said. He wanted her to teach him to climb so he could catalog the ant species found there.

In Old English, the word for tree is trough, which also means truth, Nadkarni told the seniors, adding that, while trees are rooted in the earth, they reach for the sky: “You seniors are young trees about to enter the metaphorical sky.”

After twenty years at Evergreen College and the University of Utah, Nadkarni has expanded her rhetorical reach. With a Guggenheim grant, she has taken her battle against deforestation well beyond the academic world, involving inmates in research and organic gardening, inspiring city kids to rap about nature, and designing “botanically correct” fabrics for camouflage clothing.

Nadkarni whimsically described her “meatball theory” of life. “Picture meatballs, floating in sauce,” she said. “You’re sitting on Meatball A and can jump to Meatball B (a job offer, a boyfriend …).” At the end is Meatball Z. “Choose your own meatballs!” she urged seniors.

Then she told them, “Stand up and turn your cell phones on!” She instructed them to think of their own “sky dreams”—their hopes for themselves and the planet—and to “flash tweet” away at #Brown2014. It was a tweet heard around the world.

Reader Responses to Cell Phones On