Gerrit Sanford ’49 figures he’s worn this top hat in the Commencement procession 65 times—every year since his graduation. This year he wore it as a class marshal. “It’s not silk,” he says of the old hat. “It has a texture to it.  It’s a little bit furry.” 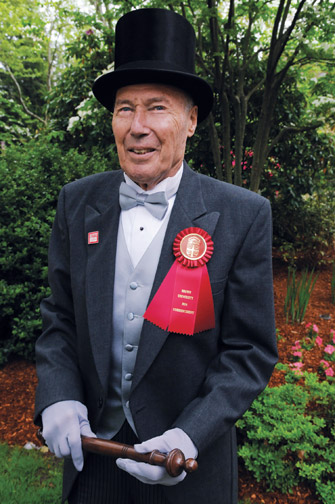 Frank Mullin
Gerrit Sanford ’49 and his tip-top top hat.
Sanford, who is secretary of his class, represents the third generation of Brunonians in his family to wear the top hat. His great-grandfather Merrick Lyon, class of 1837, was the first. He passed the hat on to Sanford’s grandfather Merrick Lyon Goff, class of 1891, whose name is embroidered on the hat's lining, below left. As freshmen, both Goff and Sanford lived in Hope College. “Do you know the old pump out front?” Sanford  says. “If you didn't know all your words to the ‘Alma Mater,’ you got pumped.”

The Goff family has a long Brown history. “All my Goff uncles went to Brown,” Sanford says, ticking off a handful of names that include Carleton Goff (1924), Godfrey Goff (1926), and Dixwell Goff (1928). Sanford winces a little as he notes that his cousin Randall Goff (1949) “left for MIT.”

It was at Brown that Sanford met his wife-to-be, Elizabeth (Bits) Swartz ’50. “She went with my roommate,” Sanford says. She married Sanford after she graduated, however. They live on Cuttyhunk Island, off the Massachusetts coast, holing up onshore during the winter. On the island, Sanford builds furniture and boats, the latter skill he learned when a Beetle Cat washed up at Cuttyhunk after the Hurricane of 1938. He was eleven.
What do you think?
See what other readers are saying about this article and add your voice.