For the first ten years after graduating from Brown, Black Entertainment Television’s (BET) chief executive, Debra Lee ’76, was on a phenomenal career trajectory: Harvard Law School, a law clerk at the U.S. District Court for the District of Columbia, and five years with Steptoe and Johnson, a prominent D.C. corporate law firm. 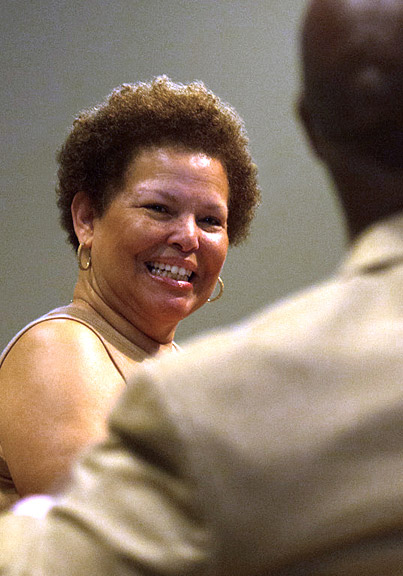 Mike Cohea
Debra Lee '76 answers questions from Stephen Hill '84 at her Commencement forum.
But, as she told her father, her work wasn’t making her happy. His reply? “If it was supposed to be fun,” he told her, “it wouldn't be called work.” All her life she had never wanted to disappoint him, but she also realized that she had never “accepted a job because I loved it.”

At a Commencement forum called “A Conversation with Debra L. Lee,” she said her first professional contact with BET was when she took it on as a client. At the time, it was less than a decade old and little known. She grew so enamored with the company that she decided to go to work for it as a general counsel and vice president. “This was the first time I was stepping off the fast track,” Lee said. “I was going to work for a small entertainment company that no one had heard of.” in 2005, Lee became BET’s chairman and chief executive. Today the station reaches more than 90 million households. Last year, Hollywood Reporter named her the twenty-fourth most powerful woman in entertainment. She was also recently inducted into the Broadcasting and Cable Hall of Fame.

At the forum, Lee answered questions about her life and career posed by Stephen Hill ’84, BET’s president of music programming and specials. Because Lee’s father was in the military, she grew up on bases in Germany and all around the United States. She was living in Compton, California, south of Los Angeles, during the Watts Riots of 1965, an event that made enough of a lasting impression, she said, that as a kid she drew pictures of burning buildings with signs reading “black owned” on them.

During her senior year at high school in Greensboro, North Carolina, white kids were bused in to achieve racial integration. “We weren’t happy about that,” Lee said. “We didn’t have running water in our science lab, but if we could get running water and keep our teachers who believed in us … we didn’t necessarily have to integrate.” She protested integration with other students, marking the first time she came into major conflict with her father, who had supported the forced-busing effort.

To be truthful, Lee said, she chose to attend Brown because three students visited her high school and “they all had the most perfect Afros.” Fortunately, she said, the school was absolutely the right choice. “I loved being able to plot my own course,” she said. At Brown, she fell under the sway of Mao’s teachings and Chinese communist ideology. “I hated capitalism, which is kind of funny now," she noted.
Lee moved the company in a new direction when she took over, putting more money and emphasis on developing new shows. She said she saw BET as having a unique relationship with the black community. “Media is a great medium for social change,” she said. “It’s important for us to tell our own stories.”

In 2001, the media giant Viacom bought BET for $3 billion, meaning it is no longer a black-owned company. But Lee said Viacom gives her free rein to run the network as she wants. “They never tell us what to program. They never tell us how to program,” she said. “I’ve always said that the day they do that is the day I leave.”