S'mores Instead of Malaria

Stand Up Planet, directed by David Munro ’85. Streaming at www.standupplanet.org. 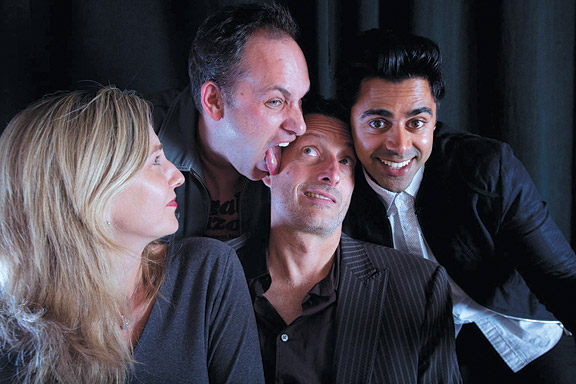 “If you’re going to tell people the truth, be funny or they’ll kill you,” movie director Billy Wilder once said. David Munro ’85 takes Wilder’s advice to heart in his new documentary project, Stand Up Planet.

Three years ago Munro pitched the Bill & Melinda Gates Foundation about a fresh approach to documenting serious social issues. “They had been kind of doing the same film over and over again with the same ten people watching,” Munro recalls. The foundation needed a fresh approach: “How do we tell stories about the developing world that include subjects like hunger and poverty and disease in a way that reaches a broader audience?”

For Munro, the solution was obvious: Make the audience laugh.

The result is the comedy showcase Stand Up Planet, hosted by Los Angeles–based comedian Hasan Minhaj, who is on a quest to find the best stand-up comics in the developing world. Behind the laughs, though, are revelations about conditions in the comedians’ countries. Minhaj, for example, talks about trying to explain camping to his cousin back in Pakistan. “In America,” he says, “camping’s this thing where you set up tents in the woods, you shit outside, and mosquitoes bite you. ‘Oh, you mean Pakistan!’ Yeah, it’s like Pakistan, only there’s s’mores instead of malaria!”

“The job description for comedians,” Munro says, “is getting you to see painful, difficult subjects in a cockeyed way. Then we laugh and suddenly realize, ‘Wow, I’m listening and I’m open to this.’”

A political science concentrator, Munro attended Brown at a time when the possibility of nuclear war seemed all too real. He says he was converted to the power of activist comedy during his senior year, when students passed a referendum asking University Health Services to stock up on cyanide pills for them to take in the event of a nuclear attack. The vote made international news.

“That was a brilliant piece of absurdist comedy and a real turning point for me,” Munro says, “because I realized comedy could take on issues and really shake them down.”

Munro made his feature film debut with Full Grown Men in 2006 and directed TV commercials before he and his wife, filmmaker Xandra Castleton, teamed up to create Stand Up Planet. With funding from the Gates Foundation, Munro embarked on an international talent hunt, using Skype to interview comedy candidates from overseas. “First thing, we looked for people who were funny,” Munro says. “Then we were interested in comedians doing socially relevant material that challenged the status quo. And finally, we wanted to find great characters.”

In addition to Minhaj, Stand Up Planet’s cast of memorable personalities includes Mumbai comedian Aditi Mittal and Soweto native Mpho Popps. When Minhaj travels to their home turf in India and South Africa, Mittal and Popps crack jokes and offer insights into local problems, including poor sanitation, racism, and AIDS.

Later, Mittal and Popps visit Los Angeles for surprise audiences with Bill Cosby, Carl Reiner, and Norman Lear. In the film’s upbeat finale, the comedians enjoy a rousing reception when they perform their stand-up routines at the famed Laugh Factory in Hollywood.

Stand Up Planet made its debut at the San Francisco International Film Festival last spring and now streams online. It’s the first incarnation of a travelogue concept Munro hopes to parlay into a reality television series. “In our minds the documentary was always seen as a pilot that we could then shop and take to series,” Munro says. “It would still have the conscientious, beating heart of Stand Up Planet but wouldn’t be strictly tied to really intense social issue stuff.”

In short, Munro says, “It’s Anthony Bourdain: No Reservations, with jokes instead of food.”

Reader Responses to S'mores Instead of Malaria