Given that our blood supply often falls short, should gay men be allowed to donate blood? 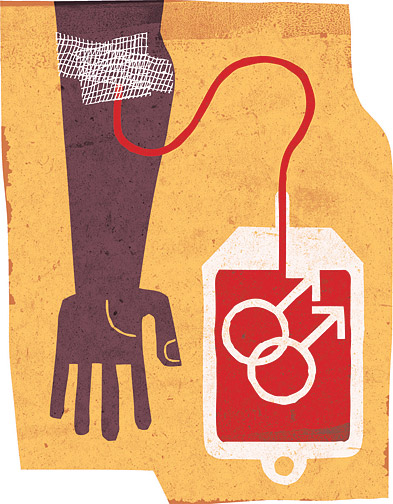 Since 1977 the FDA has banned blood donation for life by any man who has had sex with a man—even once. In a July Journal of the American Medical Association commentary, Eli Y. Adashi, a former dean of medicine and biological sciences at Brown, joined Harvard law professor I. Glenn Cohen and Harvard law student Jeremy Feigenbaum ’11 in arguing that this policy is not only outdated but is plainly discriminatory against men who have sex with men (MSM).

The authors propose a policy change that goes beyond earlier proposals by some medical organizations to merely reduce the ban to a year since the last sexual encounter. Adashi and his coauthors propose adopting a model similar to Italy’s, in which all potential donors, “MSM or otherwise,” are questioned to assess their individual risk behaviors.

Adashi says that diagnostic techniques have improved so much since 1977 that “we can now pick up an early infection easily within two weeks. You can be comfortable that, if you test somebody over two weeks and they are negative, they just are not likely to carry the disease.”

He adds that, if you ask someone if he has had sex with another man since 1977, “you basically require that to donate blood he has to be celibate, and that’s of course not a reasonable expectation. Effectively, by doing this, you have excluded the entire population of men who have sex with men in the United States, of which there are millions. It’s impractical and unreasonable to demand celibacy as a condition for a donation.”

The policy in countries such as Italy, Adashi points out, is to offer a detailed questionnaire that stratifies the level of risk and then augment that with an interview between the potential donor and a health-care professional. The population is then divided into a few risk categories. Low-risk or no-risk men are allowed to donate, while high-risk candidates are retested in four months, at which point they are allowed to donate if they are still HIV-negative. Potential donors who engage in such very high-risk behaviors as intravenous drug use are given a lifetime ban.

Filling out a more detailed questionnaire raises privacy issues, however. How much personal information should a blood donor be required to provide? “This will have to be studied,” Adashi says. “Nobody is suggesting that we jump into a new system willy-nilly.”