By Michael McLaughlin / September/October 2014
September 4th, 2014
Dinner plates had been cleared away and the singing of college songs had died down among the incoming male students at the 1961 Freshman Week banquet. There was one custom left for Mark Kapner ’65 and his fellow freshmen to uphold: the annual panty raid on Pembroke. Kapner refused. 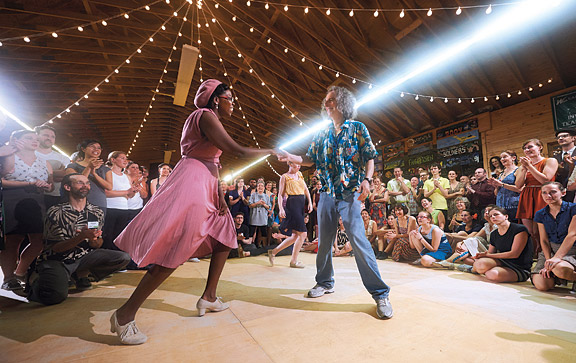 Courtesy Mark Kapner
“I thought this was the lamest tradition,” he says. Instead of harassing Pembroke’s students, Kapner brought over his guitar. It drew a crowd. “I met three upperclassmen who were excellent singers and had a group already,” he says. “When they found out I played the banjo, they asked me to join their folk group.”

Thus began a lifelong love of music that took him from playing folk music to accompanying Neil Diamond to swing dancing. “I enjoy playing music on stage for a quarter of a million people or in a living room for one person,” Kapner says. “It’s all fun.”

At Brown, Kapner played in an ever-changing array of bands and even cut tracks on two folk compilation albums recorded on campus, including one for RCA. “You can say that I chose music as a totally independent study program, to the dismay of my parents,” Kapner says.

After a short stint teaching English in Kenya with the Peace Corps, Kapner moved to San Francisco. “Everything I’d heard about the lifestyle drew me,” he says. “California was for people who worshipped sex, drugs, and rock and roll. California was a place where people seemed happier and more relaxed, and the flowers bloomed in January, and people were enjoying a hedonistic lifestyle.”

Several years after he arrived, he struck up a friendship  with the drummer for the seminal hippie group Country Joe and the Fish. Kapner auditioned and was hired to replace the psychedelic group’s keyboardist. Two weeks later, they were guests on Johnny Carson’s Tonight Show and embarked on a European tour.

During one Country Joe performance, Kapner destroyed a ukulele and lit it on fire in a parody of Jimi Hendrix and The Who, known for destroying their instruments on stage. He also played at Woodstock. “It was exciting, but I couldn’t understand why people were sitting in the mud and garbage for three days,” he says. “They could have been home smoking dope, eating good food, and having sex without sitting in the mud.”

Personality conflicts split up the band, but it wasn’t long before Kapner got a job playing with Neil Diamond. That gig lasted about a year and a half, and though Kapner was never part of a hugely successful band again, he continued to perform in other groups through the 1970s.

Then, in 1996, a friend in Marin County took him to a swing lesson. It rekindled memories of his adolescence, when he and friends danced to early rock and roll. It turned out they were unknowingly doing the Lindy Hop. Soon, he was regularly putting on his dancing shoes to learn more intricate swing moves.

“For me the Lindy Hop and other forms of swing dancing are a kind of meditation in motion,” Kapner says. “When I’m dancing, I just notice any judgmental thoughts that pop into my mind, which might include ‘The floor is sticky’ [or] ‘the woman I’m leading is awkward.’

“I notice the thoughts, but let go of them and come back to doing my job, which is paying attention to my partner, keeping my head clear and simple, and making sure we don’t collide with any other couples.”

Kapner retired during summer 2013 and now lives north of San Francisco in Marin County.
What do you think?
See what other readers are saying about this article and add your voice.

Reader Responses to The Troubadour