In the first hour of The Intergalactic Nemesis, intrepid reporter Molly Sloan and her assistant trek to the Carpathian Mountains, narrowly escape a dagger-throwing assassin, and battle a hypnotist named Mysterion the Magnificent—and that’s before they learn about the threat of Zygonian sludge monsters. 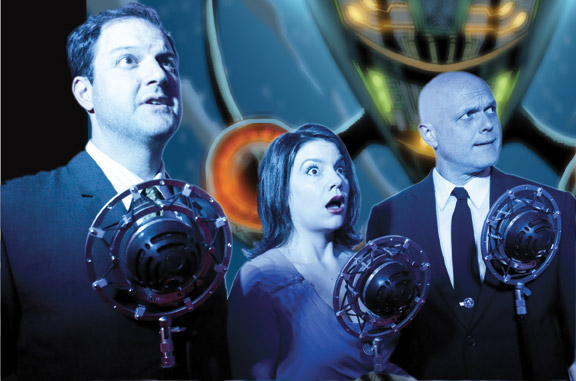 Intergalactic, a science fiction‒noir trilogy set in the 1930s and 1940s, is a touring performance that writer, producer, and director Jason Neulander ’91, ’93 AM calls a “live action graphic novel.” The first two episodes, Target Earth and Robot Planet Rising, have played to more than 70,000 people around the world, including packed houses at the John F. Kennedy Center for the Performing Arts in Washington, D.C., and at the New Victory Theater in New York City. The third show in the trilogy, Twin Infinity, premiered in September in Neulander’s adopted hometown of Austin, Texas, and will tour through the spring.

Intergalactic is an innovative mash-up of radio play and comic book in which three stage actors voice the characters while giant comic book panels are projected onto a two-story screen behind them. Meanwhile, at center stage, a sound-effects artist uses everything from thunder sheets to crumpled paper and a child’s train whistle. A pianist, also on stage, plays a dramatic score. The combination of these sensory inputs has a remarkably convincing, almost cinematic quality.

It all began back in 1996, when Neulander, an early devotee of sci-fi, fantasy, and horror, produced a low-tech sci-fi radio play with a friend at an Austin coffee shop. After a full rewrite with Chad Nichols ’92 in 2007, Intergalactic in its current form opened in fall 2010. It’s been featured by Conan O’Brien on television, and the New York Post called it “Great fun! [A] happily retro multimedia extravaganza!” The Calgary Herald went a step further, suggesting that Intergalactic is “the coolest theatrical experience Earth has ever seen.”

“It doesn’t cease to blow me away that we appeal from age 7 to 70,” Neulander says. “It’s parents with kids, singles on date night, older people who remember radio from when they were kids, and sometimes their adult children.”

“I knew I wanted to direct plays,” he says, “but I didn’t realize I wanted to direct new plays. So actually being able to work with playwrights, and develop the material, and watch it evolve in the rehearsal room, and see how collaborative that process was—it completely changed my life.” The show, Neulander says, is even a response to a question Vogel once posed: “People go see individual movies again and again,” Neulander recalls, “so how do you create plays that people want to see again and again? Intergalactic in many ways is the answer to that, because you can’t see all of the individual elements in one sitting.”

After finishing his master’s in theater, Neulander and playwright David Bucci ’92 formed Austin’s Salvage Vanguard Theater (SVT), which focuses on new plays by young, undiscovered playwrights. Bucci eventually moved on, but Neulander ran the theater for fourteen years. Now he’s expanding Intergalactic to other media: a web series, digital comic books, a podcast, a novel, and possibly an independent film. There’s artistic merit in challenging audiences the way SVT did, Neulander says, but it’s also worthwhile to produce a show that’s pure escapist joy.
“I’ll say this,” he concludes. “I’m having way more fun now than I’ve ever had in my life.”